REVIEW: “THE HONEYMOONERS” A NOSTALGIC TRIP DOWN MEMORY LANE A DELIGHT @ THE PAPER MILL PLAYHOUSE

For many theatergoers who came of age in the nascent days of network television, the Paper Mill Playhouse’s world premiere production of the musical version of The Honeymooners will be a real treat. The show’s sprightly music, energetic choreography, familiar themes, and spot-on character replications of Ralph and Alice Kramden and Ed and Trixie Norton offer a sweet trip down nostalgia lane.

While the older audience on opening night laughed uproariously at the quartet’s crazy antics, will this polished, professional production appeal to a wider audience? Well, a Gen X friend assured me that, thanks to reruns, the younger generations are familiar with the show. Let’s hope that knowledge translates into box office receipts.

With a book by Dusty Kar and Bill Nuss, music by Stephen Weiner and lyrics by Peter Mills, The Honeymooners feels like it was ripped from the DuMont network’s variety series, The Cavalcade of Stars, which starred comic Jackie Gleason and ran through the 1950s. The recurring sketch featuring the two Brooklyn couples was spun off into its own half-hour series in 1955 and ran for 39 episodes through the early 60s on CBS. Today, they are a staple of late-night reruns, especially on New Year’s Eve!

Per usual, the plot revolves around a hare-brained, get-rich-quick scheme dreamed up by self-described “blowhard, windbag, big mouth” Ralph Kramden who enlists his neighbor Ed Norton’s financial support to realize his dream. This time it entails their entering a Madison Avenue ad agency’s jingle-writing contest to win a prize of $500. Renting a piano, the two compose a ditty praising Facciamatta’s Mazzaroni cheese that not only wins the contest but results in their being hired by the agency’s Creative Director who has been threatened with the loss of his job if the jingle doesn’t please the cheese company owner—only to find their long friendship sorely tested by the agency chairman’s preference for one over the other (Above: Ed and Ralph share their news with Trixie and Alice). 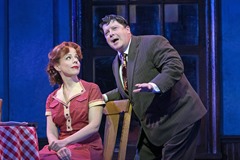 It’s this plot complication that turns what starts off as a loud, production-number ridden first act into a touching tale about yearning to make it big, what constitutes success and the importance of friendship in the life of an everyday person. Despite a first act that feels a bit long, Kay and Nuss pepper their script with wry contemporary references, actual lines from the original show and a surprising, droll explanation of the skit’s inception. John Rando’s energetic, strong direction avoids sloppy sentimentality and corniness. By the time the curtain comes down, we understand the two couples better and have come to realize—as do they—that success comes in many forms (Left: McGrath and Kritzer share a tender moment).

All this would not work if not for the wonderful replication of the television characters by the four actors Rando has cast. Not only do Michael McGrath and Michael Mastro resemble Ralph and Ed to a T but they nail their voices and manner of speaking, down to Ralph’s stuttering when taken aback and Ed’s persnickety gestures. The two sing and dance with energy and style, never dropping their spot-on portrayals for even one note. Mastto’s superb rendition of the quickly paced patter-style lyrics of “Love Gone Down the Drain” (above, right) brings down the house. 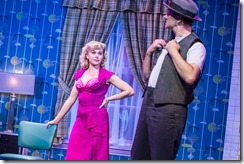 They men are matched by the equally fine Leslie Kritzer and Laura Belle Bundy as Alice Kramden and Trixie Norton, respectively. With her sassy, snarky zingers and fabulous singing voice and stage presence, Kritzer is a force majeure, as comfortable singing Broadway-style tunes as channeling Ella Fitzgerald’s ability to “scat,” vocally improvise with nonsense syllables; she earned a standing O for her rendition of “A Woman’s Work” near the end of the second act. An equally acerbic Bundy (above, with Mastro) had fewer show-stopping scenes although she was quite funny in her audition to become an El Morocco nightclub showgirl, and the subsequent production number “Keepin’ It Warm” that earns her a spotlight on the Cavalcade of Stars in “The Facciamatta Commercial.”

Lewis Cleale is appropriately smarmy as Bryce Bennett, the ad agency’s scheming Creative Director, and Lewis J. Stadlen is a terrific Mr. Facciamatta, who “packs heat” and is not above using it to get what he wants. A chorus of dancing bus drivers, ad agency executives, sewer workers and tony denizens of Park Avenue execute Joshua Bergasse’s choreography with agility and vigor. And Remy Kurs’ musical direction never overpowers the singing or the story.

While the way Ralph treats Alice may not sit well with our contemporary attitudes toward relations between the sexes, the fact that she gets the better of him every time goes a long way to defang his cringe-worthy talk of sending her “to the moon” and giving her a “pow, right in the kisser” when she crosses him. That he is self-aware of his blusteriness helps too, and takes our disapproval of him down a notch.

So, if you’re longing for the old days, when television wasn’t on 24-7 and filled with doom-and-gloom stories about nukes and climate change, you’ll want to visit The Honeymooners at the Paper Mill Playhouse for a few “har, hardee har hars.” The show was a hit then and will be one now. It will make you feel young and/or brighten your day. You won’t want to miss it before it moves to Broadway!

The Honeymooners will be performed at the Paper Mill Playhouse, 22 Brookside Drive, Millburn, through October 29. For information and tickets, call the box office at 973.379.7676 or visit www.PaperMill.org online.