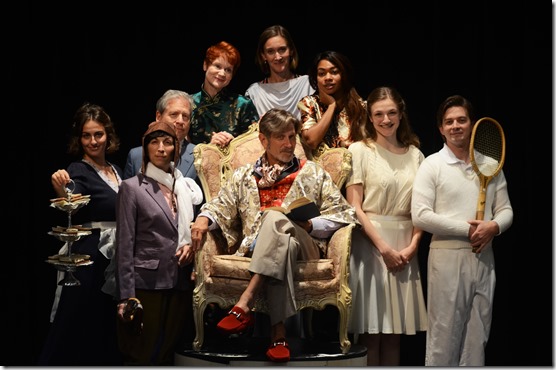 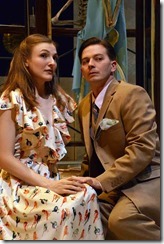 The plot is set in the upscale manor home of long-married and seriously hen-pecked Chrysale (David Cantor) and his stately wife Philamente (Sandy York). Philamente is an early emancipated woman who rules her household, including husband and two daughter,s with the proverbial iron fist, ok…velvet-covered fist. She has dedicated herself to the “pursuit of noble thought.” Sounds pretentious? It is. Her circle of intellectual wannabes includes her two daughters, Henriette (Lizzie Engelberth (right) and Armande (Nadia Denise Brown); a daffy, sexually frustrated sister-in law, Belise (Amy Griffin); and an eccentric sister-in-law, Arista (Lea Antolini). Leading the group is a pompous poet, Trissotin (David Edwards), who is enjoying Philamente’s generous hospitality (or more?). Without it….. he would be back on the sidewalk…a talentless poet of modest means, or so says the young man who is in love with Henriette, Lycandre (Chris Young, right). His hope of marriage has a major stumbling block: Philamente’s approval is mandatory, and she favors Trissotin, who controls her like a Svengali. How can he overcome this situation? Will Chrysale help? He supports their cause, but sadly is most interested in his own creature comforts, including food and drink. Can he save the job of maid/cook Martine (Isabel Cade) who commits the cardinal sin of using poor grammar? Most importantly, will he stand up to his wife and help Henriette and Lycandre in their quest to marry? 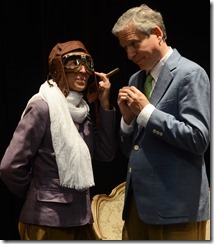 This cast is pure joy. Each properly receives a star turn…starting with Amy Griffin’s wild, lovable Belise; Lizzie Engelberth as the younger daughter Henriette…clearly the most levelheaded member of the household; Nadia Denise Brown excels at displaying Armande’s less attractive (jealous) side; Sandy York is impressive as the rigid mother besotted with her guru Trissotin; David Cantor (photo above right), new to the CSC, nails the part of bourgeois Chrysale. His transformation in the second act is a play highlight; Lea Antolili (above, with Cantor), a CSC favorite, is a hoot as the super-eccentric Arista who is the only voice of reason. Possibly, the audience favorite is Isabel Cade as the sassy Martine. She is obviously enjoying her fun part. David Edwards IS Trissotin—spot-on as the sleazy poet (below right). 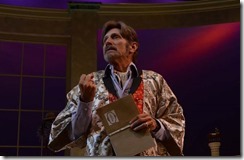 Rounding out the cast are Nick Bettens as poet Vadius; Joe Anthony doubles nicely as the Judge and a Servant; plus a terrific group of acrobatic servants; Connor Goerk; A.J.Lewis; Bianna Morris; and Megan Schmiedhauser. All four are students in Centenary University’s theatre department.

The Learned Ladies is pure farce that still provides laughter after 350 years. This is a very impressive production with a very talented cast and excellent production values. You might be a bit confused in the early scenes as you adjust to the rhyming verse. Stay with it… you are in for a two-hour treat.

Performances for The Learned Ladies run through October 22.  The remaining performance dates are Fridays Oct 13 and 20 at 8PM; Saturdays Oct 14 and 21 at 8PM; Sundays Oct 8, 15 and 22 at 2PM; Wednesdays Oct 11 and 18 at 2PM and Thursdays Oct 12 and 19 at 7:30PM.  All performances are in the Sitnik Theatre of the Lackland Performing Arts Center.

Tickets for The Learned Ladies are $27.50 for adults on matinee and Friday evening performances.  Saturday evening ticket prices are $29.50 for adults.  Tickets for children under 12 are $17.50 for all performances.  Thursday evening performances are $27.50 for all seats with a Buy One/Get One rush ticket special.  To qualify for BOGO offer tickets must be purchased in person at the Centenary Stage Company box office as early as two hours prior to performance time.  BOGO offer not valid for advance ticket sales and may not be combined with any other offer or discount.

For more information or to purchase tickets visit centenarystageco.org or call the Centenary Stage Company box office at (908) 979 – 0900.  The box office is located in the Lackland Performing Arts Center at 715 Grand Ave. Hackettstown, NJ.  The box office is open Monday through Friday from 1 – 5 pm and two hours prior to each performance.

Photo credit for ALL is ROBERT EBERLE