JUST IN TIME FOR HALLOWEEN, CENTENARY STAGE COMPANY PRESENTS A TWO-DAY SPECIAL EVENT REMEMBERING THE INFAMOUS TILLIE SMITH AND THE TRAGIC EVENTS THAT ROCKED A NATION 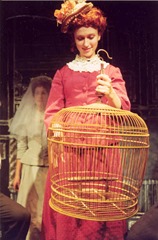 WHEN: Saturday, October 28, at 2PM; Wednesday, November 1, at 8PM
WHERE: Centenary University, Hackettstown
TICKETS: The Tillie Smith Historical Walk on Saturday, October 28 at 2PM is a FREE event.  There is a $5 reservation fee for the staged reading of The Tillie Project on Wednesday, November 1 at 8PM.  Reservations are highly recommended.  The Tillie Smith Historical Walk and staged reading of The Tillie Project are sponsored in part by The House of the Good Shepherd and Heath Village Retirement Community.

For more information or to reserve tickets visit centenarystageco.org or call the CSC box office at (908) 979 – 0900.  The box office is located in the Lackland Performing Arts Center; 715 Grand Ave. Hackettstown, NJ.  The box office is open Monday through Friday from 1 – 5 pm and two hours prior to every performance.  Centenary Stage Company can also be found across social media platforms; Facebook, Instagram and Twitter.  Like and follow to receive the latest in CSC news and offers.

Just in time for Halloween, Centenary Stage Company takes a chilling journey back to the final days of the infamous Tillie Smith. Over 100 years ago, the murder of Tillie Smith, a kitchen worker at Centenary Collegiate Institute (now Centenary University), rocketed the town of Hackettstown to national prominence.  With wildly fluctuating reports driven by what some claim to be yellow journalism, the reputation of Tillie and her accused murderer, James Titus, swung from young innocent to harlot and upstanding citizen to lascivious predator.  To this day, many say her ghost still haunts the campus of Centenary University, with reported sightings in dorm hallways and stories of organ music playing without anyone playing. While James Titus was convicted of her rape and murder, the truth is still unknown as to what actually happened that fateful night.

On Saturday, October 28 at 2PM join Centenary Stage Company for a guided walk, complete with historical narration, following the path of Tillie Smith moments before her tragic death, as well as, a glimpse of old Victorian America and life in 19 century Hackettstown.  Additionally, the historical walk will encourage its participants to act as detectives, separating fact from legend, in the ultimate search for who really killed Tillie Smith.

Then on Wednesday, November 1 at 8PM Centenary Stage Company will present a staged reading of PEW Fellow Jeanne Murray Walker’s play The Tillie Project.  Commissioned by Centenary Stage Company in 2002 under the auspices of CSC’s distinguished Women Playwrights Series, The Tillie Project is the result of an 18 month research and development process including several town-hall style meetings and radio call-in programs, where community members were invited to share their own knowledge of the event.  Additionally, Walker consulted with numerous historians, poured over documented first-hand accounts, combed through newspaper articles from the period, as well as, meticulously scrutinized the actual transcript of the trial that ultimately led to the conviction and sentencing of James Titus.  Although a work of historical fiction, The Tillie Project keeps true to its source material by, at times, borrowing directly from the trial transcript.

Directly following the reading of The Tillie Project, Centenary Stage Company will host a talkback with special guest author, Maryann McFadden.  A Northwest New Jersey resident and Tillie expert herself, McFadden just completed her 4th novel, THE CEMETERY KEEPER'S WIFE, a historical novel about the murder of Tillie Smith in 1886, a potato peeler at Centenary College Institute, which ignited a tide of outrage throughout Victorian America. The novel goes back and forth in time as McFadden interprets Tillie’s life, and death, through the eyes of Rachel Miller, who just moved into Union Cemetery after a hasty marriage to Adam, the 7th generation cemetery keeper. The novel will be released in 2018.  Additional published works include; her self-published novel, THE RICHEST SEASON, which sold at auction to Hyperion Books. THE RICHEST SEASON which became a Target Breakout Novel and was awarded an Indie Next Pick by The American Booksellers Association. SO HAPPY TOGETHER and THE BOOK LOVER, also Indie Next Picks. McFadden is also a speaker and writing coach, and loves to chat with book clubs. Her unusual publishing journey has inspired many aspiring authors.

The 2017-2018 season of performing arts events at the Centenary Stage Company is made possible through the generous support of the Geraldine R. Dodge Foundation, the NJ State Council on the Arts, the Shubert Foundation, the Blanche and Irving Laurie Foundation, the Sandra S. Kupperman Foundation, and CSC corporate sponsors, including Premier Season Sponsor Heath Village Retirement Community, Silver Sponsors Hackettstown Medical Center, Home Instead Senior Care (Washington), The House of the Good Shepherd, Fulton Bank of New Jersey, and Centenary Stage Company members and supporters.