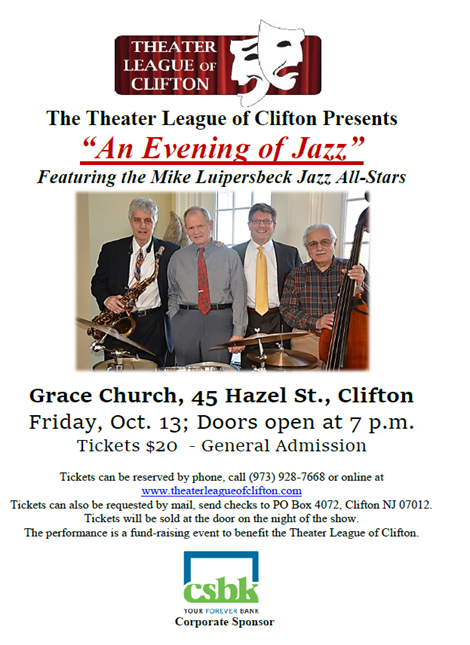 TICKETS: $20 per person and can be reserved online, by phone or by regular mail (PO Box 4072, Clifton, NJ 07012). To reserve tickets, call (973) 928-7668, or visit the theater league’s website. Tickets also will be sold at the door on the night of the show. There will be a reception at the church following the performance.

The Luipersbeck band (above) performs jazz standards and selections from the American Songbook. Members of the quartet include Luipersbeck on drums, Ron Naspo on bass, Peter Greco on keyboards and electric guitar, and Michael Gabriele on saxophone.

The combo has performed at numerous venues throughout northern New Jersey for more than 10 years. This past summer the band was featured at the “Tuesdays in the Plaza” series in downtown Paterson, sponsored by the Passaic County Department of Cultural and Historic Affairs and the Passaic County Board of Chosen Freeholders.

The Theater League of Clifton will stage its fall production of Thoroughly Modern Millie, directed by Kathleen Kellaigh, with performances on Nov. 3, 4, 5, 10, 11 and 12 at the Theresa Aprea Theater, 199 Scoles Ave., Clifton.

Founded in 2005, The Theater League of Clifton is a non-profit organization dedicated to fostering an appreciation of the arts through theatrical performances, while providing quality entertainment for all ages. The theater league welcomes volunteers in all aspects of performance and production. Mark Peterson is the president of the organization.