“CLUE THE MUSICAL” OPENS THIS WEEKEND IN SOUTH ORANGE OCT. 13-28—JUST IN TIME FOR HALLOWEEN! 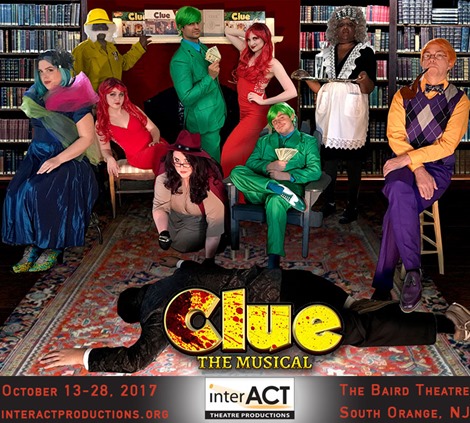 Music by Galen Blum, Wayne Barker, Vinnie Martucci
Lyrics by Tom Chiodo
Book by Peter DiPietro
Based on the Parker Bros. board game.
Directed and Choreographed by Nicholas J. Clarey
Music Direction by Holland J. Jancaitis
Presented in part through the generosity of Dawilla Madsen

WHEN: October 13-15, 20-12, 27-28, 2017. Friday and Saturday night performances begin at 7:30pm, and the Sunday matinees begin at 4:00pm
WHERE: The Baird on Three, 5 Mead St., South Orange
TICKETS: Online tickets are discounted at $22 for Adults and $18 for Seniors/Students at interactproductions.tix.com until 2 hours prior to the performance. All tickets purchased at the box office in person are $25, and are available starting one hour before showtime. Tickets cannot be purchased by phone.
Buy Tickets Now
More Info

The internationally popular game is now a fun filled musical which brings the world's best know suspects to life and invites the audience to help solve the mystery: Who killed Mr. Boddy, in what room and with what weapon?

The audience receives forms to help them deduce the solution from clues given throughout the fun filled evening. Three audience members choose from cards representing the potential murderers, weapons and rooms; there are 216 possible solutions! Only one hard-nosed female detective is qualified to unravel the merry mayhem.

Founded in 2009, interACT is now in its 9th season of bringing award-winning theatre to the community. Next on their slate are two shows in December: the interACT Youth production of The Jungle Book, and the Christmas story Black Nativity, which will be a benefit fundraiser for the South Orange/Maplewood Community Coalition on Race. More details at interactproductions.org.