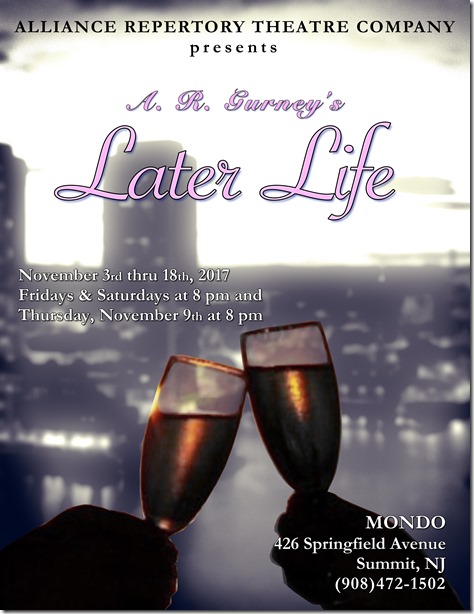 Austin (Alan Ellis) has spent his entire life convinced that something terrible is bound to happen to him. One night, he has the pleasure of rekindling a romance begun almost thirty years ago with Ruth (Leslie Williams), a multiple divorcee whose personal life is in turmoil.  Their mutual friends (Judi Laganga and Tait Ruppert) look to Austin as Ruth's last shot at normalcy, and are hoping the wildly unpredictable Ruth will help loosen Austin from the grip of years of depression and lifelessness.

Director David Christopher says, “Working on the efforts of characters who, in their “later life,” are hoping to change their situation, has been very meaningful to the actors and myself.”

What critics had to say about the New York production:

"Charmingly clever yet immeasurably touching." —I.

"Seldom can a sad story have been told with more fun and humor." —The New Yorker.

"In eighty breathless minutes [A.R. Gurney] vaults from the joyous shiver of renewal to the shudder of lost opportunities, leaving us with an anguished tableau of self-realization." —NY Newsday.