BASSIST/SINGER TO APPEAR @ THE BICKFORD THEATRE 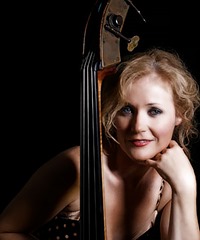 WHEN: Monday, October 23, at 7:30 and the seating for this show is unreserved
WHERE: Bickford Theatre, 6 Normandy Hgts Rd., Morristown
TICKETS: $17 in advance and may be purchased online at morrismuseum.org, by phone at (973) 971-3706, or in person at the Bickford Theatre Box Office.
Tickets for the concert are available online at www.morrismuseum.org or by phone at 973-971-3706.

The Nicki Parrott Trio will make their only New Jersey appearance this fall as part of the very popular Jazz Showcase series.

Bassist and singer Nicki Parrott moved to New York from her native Australia in 1994 and within just a few years she became the regular bassist for the Les Paul Trio. The legendary guitarist, who was not known for handing out accolades, loved her work and said, “She has that special gift you cannot buy in a music store.”

As part of the Les Paul Trio, Nicki had the opportunity to work with many guitar greats including Paul McCartney, Slash, Steve Miller, Frank Vignola, Bucky Pizzarelli, and Tommy Emmanuel. Her extraordinary talent has made her a first-call bassist for many jazz greats and she has performed with musicians such as Clark Terry, John Pizzarelli, Dick Hyman, Larry Carlton, Houston Person, Randy Brecker, Jose Feliciano, Harry Allen, and Ann Hampton Calloway to name just a few.

Critics also rave about Nicki Parrott whose playing, singing, and sense of humor have captivated audiences for the past two decades. Cabaret Scene wrote that “Nicki Parrott could make anyone love jazz,” and the international jazz publication Jazz Times applauds her musicality noting that she “…brings clear articulation, beautiful tone, a sense of rhythmic assuredness, and a touch of allure to inventive arrangements.”

The trio includes two talented and popular musicians. Italian-born Rossano Sportiello is an award-winning, accomplished pianist who has performed with many of the world’s greatest jazz musicians such as Clark Terry, Harry Allen, Kenny Davern, and Slide Hampton. His recordings have been critically acclaimed including People Will Say We’re In Love a duet with Nicki Parrott that was selected by The New Yorker as one of the top 10 CDs of the year.

Drummer Eddie Metz Jr. has been working with Nicki for several years and draws praise no matter the music. Louis Bellson called him “very musical, tasty and brilliant” while Dick Hyman said simply “one of the best in the business.” Known for his very musical approach to the drums, Eddie has been in demand since his days as a jazz studies student at William Paterson University, including luminaries such as Chick Corea, Michael Feinstein, Arturo Sandoval, Bucky Pizzarelli, Milt Hinton and Ken Peplowski.