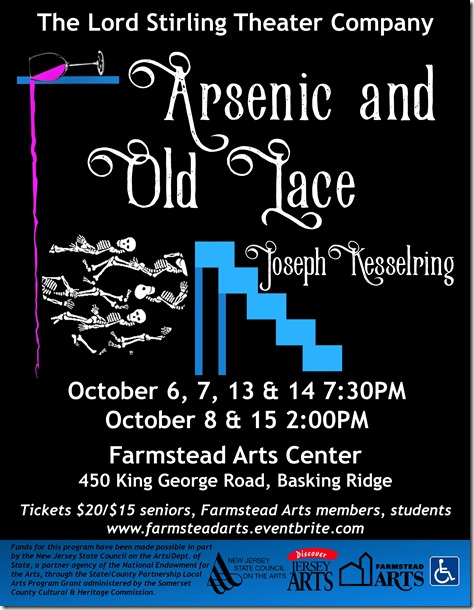 Drama critic Mortimer Brewster has just gotten engaged when he discovers that his sweet and lovable spinster aunties have a deadly secret involving lonely old men and elderberry wine laced with arsenic, strychnine, and “just a pinch” of cyanide. Add in an eccentric brother who thinks he is Teddy Roosevelt and another criminally insane brother who shows up unexpectedly with his plastic surgeon accomplice and a body to hide, and the result is hilarity and mayhem.

Written in 1939, “Arsenic and Old Lace” was a Broadway hit, running for 1,444 performances from 1941 to 1944. One of the great American comedies, the play is best known through the classic 1944 film adaptation starring Cary Grant and directed by Frank Capra.

The Lord Stirling Theater Company’s production of “Arsenic and Old Lace” is directed by William Ward of Basking Ridge. The cast, in order of appearance, includes: Sharon McGuire of Westfield as Abby Brewster, Robert Goodwin of Highland Park as The Rev. Dr. Harper and Mr. Witherspoon, Bob Scarpone of Flanders as Teddy Brewster, Ed McCarty of Bridgewater as Officer Brophy and Mr. Gibbs, Garry Tamburro of Springfield as Officer Klein, Lisa Black of Westfield as Martha Brewster, Katy Cockrell of Fanwood as Elaine Harper, Matthew Gochman of Jersey City as Mortimer Brewster, Lee Grabelsky of Monroe as Jonathan Brewster, Danielle Levitt of Westfield as Dr. Einstein, Allan Gershenson of Linden as Officer O’Hara, and Changkuo Hsieh of Parsippany as The Inspector.

“Arsenic and Old Lace” concludes The Lord Stirling Theater Company’s fourth season at the Farmstead Arts Center, following their production of “Of Mice and Men” this past June, “And Then There Were None” and “The Dresser” in 2016, “The Tempest” and “Frankenstein’s Fate” in 2015, and “The Legend of Sleepy Hollow” in 2014. A dynamic community of creative artists based in Basking Ridge, the group is committed to presenting innovative theater for diverse audiences, through readings and full productions of classical theater and new works, as well as exploring the American experience through compelling productions that illuminate and celebrate our history, culture and literature. The theater group fosters the next generation of theater artists and audiences by providing unique hands-on educational programming and training in all aspects of theater production. For more information, visit www.lordstirlingtheater.com or our Facebook page.

The English Barn Theater is wheelchair accessible. Anyone anticipating the need for additional accessibility services please send an e-mail in advance to farmsteadartscenter@gmail.com.