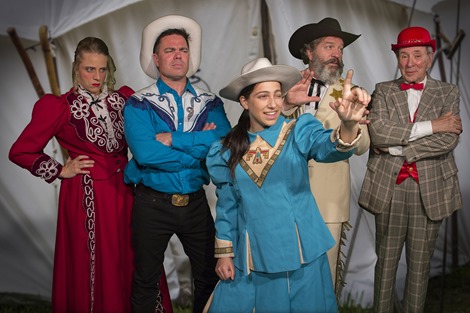 ANNIE GET YOUR GUN

WHEN: Fridays, July 28 and Aug. 4 at 8 p.m.; Saturdays, July 29 and Aug. 5 at 8 p.m.; and Sundays, July 30 and Aug. 6 at 2 p.m. A reception with the cast and crew follows the opening performance on July 28.
WHERE: Mercer County Community College’s (MCCC’s) Kelsey Theatre, 1200 Old Trenton Road, West Windsor
TICKETS: $20 for adults, $18 for seniors, and $16 students and children. Tickets may be purchased online at www.kelseytheatre.net or by calling the Kelsey Box Office at 609-570-3333.  Kelsey Theatre is wheelchair accessible, with free parking available next to the theater.

Famous throughout the Wild West for her sharpshooting skills, Annie Oakley meets her match in fellow gunslinger Frank Butler. Performing with the traveling show headlined by the legendary Buffalo Bill Cody, Annie and Frank spar both professionally and romantically. Along the way, they belt out some of the most well-known tunes in Broadway history, including Doin' What Comes Naturally, Anything You Can Do, I Got the Sun in the Morning, and, of course, There’s No Business Like Show Business. (Image: From left are Meredith Thomas as Dolly Tate, Brian Davis as Frank Butler, Karaline Rosen as Annie Oakley, Scott Karlin as Buffalo Bill Cody, and Nathan Parker as Charlie Davenport. Photo by John Maurer)

With music and lyrics by Irving Berlin, Annie Get Your Gun premiered on Broadway in 1946, where it ran for more than 1,100 performances. A film version debuted in 1950 that won the Academy Award for Best Musical Score and received three other nominations.