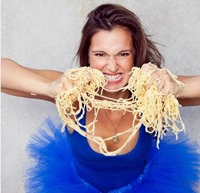 Actor and comedian Candice Guardino brings her hit one-woman show  to the Morris Museum’s Bickford Theatre. The show which had a successful and critically acclaimed Off-Broadway run in 2013 has been playing to packed houses across the country for the past couple of years.

Inspired by the acting career of her famous late uncle, Harry Guardino, Candice has based her popular show on her own childhood experiences growing up Italian on Staten Island. This hilarious, heartwarming show includes the unfiltered wisdom of her outspoken grandmother, unique stories of the distinctive personalities of relatives, and video cameos from friends Leslie Jordan (“Will and Grace”), Mario Cantone (“Sex & the City”), Steve Schirripa (“The Sopranos”), and Vic DiBitteto (“Mall Cop 2”).

Candice made a name for herself on the New York theatre scene with her outrageously revealing one-woman show “S.O.S.” which ran at Stage 72 and the Laurie Beechman. Her work has been acclaimed by critics who have called her someone who “Stuns!” and an actor who is “redefining solo performances.” She works with comedy groups such as the Upright Citizens Brigade, The Pit, Cult Comedy, and Second City Showcases. Some of her credits include New York Musical Theatre Festival, the Off-Broadway show “That Other Woman’s Child,” “The Guiding Light,” “All My Children,” and “Law & Order.”

“Whether you are Italian or not, you’ll relate to this very funny and touching show,” says the Bickford Theatre’s Artistic Director Eric Hafen. “I’m sure that our audience will love this extremely talented comedian who possesses a unique storytelling ability.”