ISRAELI FILM FESTIVAL TO BE HELD IN FREEHOLD THIS WEEK 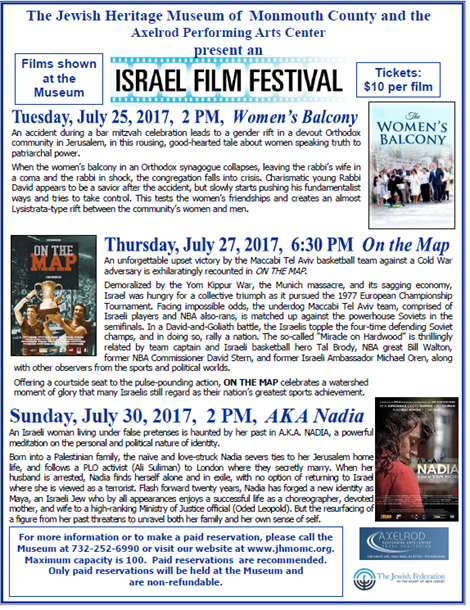 WHEN: Tuesday, July 25 - 30
WHERE: The Jewish Heritage Museum is located in the Mounts Corner Shopping Center, at 310 Mounts Corner Drive Freehold, at the corner of Route 537 and Wemrock Road (between the CentraState Medical Center and Freehold Raceway Mall). It is on the second floor of the historic Levi Solomon Barn. The Museum is handicapped accessible.
ADMISSION: $10 per film.
For more information or to make a paid reservation (non-refundable), call the Museum at 732-252-6990, or visit www.jhmomc.org.

The Women’s Balcony. An accident during a bar mitzvah celebration leads to a gender rift in a devout Orthodox community in Jerusalem, in this rousing, good-hearted tale about women speaking truth to patriarchal power. When the women’s balcony in an Orthodox synagogue collapses, leaving the rabbi’s wife in a coma and the rabbi in shock, the congregation falls into crisis. Charismatic young Rabbi David appears to be a savior after the accident, but slowly starts pushing his fundamentalist ways and tries to take control. This tests the women’s friendships and creates an almost Lysistrata-type rift between the community’s women and men.

On the Map. An unforgettable upset victory by the Maccabi Tel Aviv basketball team against a Cold War adversary, is exhilaratingly recounted in On the Map. Demoralized by the Yom Kippur War, the Munich massacre, and its sagging economy, Israel was hungry for a collective triumph as it pursued the 1977 European Championship Tournament. Facing impossible odds, the underdog Maccabi Tel Aviv team, comprised of Israeli players and NBA also-rans, is matched up against the powerhouse Soviets in the semifinals. In a David-and-Goliath battle, the Israelis topple the four-time defending Soviet champs, and in doing so, rally a nation. The so-called “Miracle on Hardwood” is thrillingly related by team captain and Israeli basketball hero Tal Brody, NBA great Bill Walton, former NBA Commissioner David Stern, and former Israeli Ambassador Michael Oren, along with another observers from the sports and political worlds.

Offering a courtside seat to the pulse-pounding action, On the Map celebrates a watershed moment of glory that many Israelis still regard as their nation’s greatest sports achievement.

AKA Nadia. The film is about an Israeli woman living under false pretenses and is haunted by her past. It is a powerful meditation on the personal and political nature of identity.

Born into a Palestinian family, the naïve and love-struck Nadia severs ties to her Jerusalem home life, and follows a PLO activist (Ali Suliman) to London where they secretly marry. When her husband is arrested, Nadia finds herself alone and in exile, with no option of returning to Israel where she is viewed as a terrorist. Flash forward 20 years, and Nadia has forged a new identity as Maya, an Israeli Jew who by all appearances enjoys a successful life as a choreographer, devoted mother, and wife to a high-ranking Ministry of Justice official (Oded Leopold). But the resurfacing of a figure from her past threatens to unravel both her family and her own sense of self.

The JHMOMC is a tax-exempt organization under Section 501(c)(3) of the Internal Revenue Code.