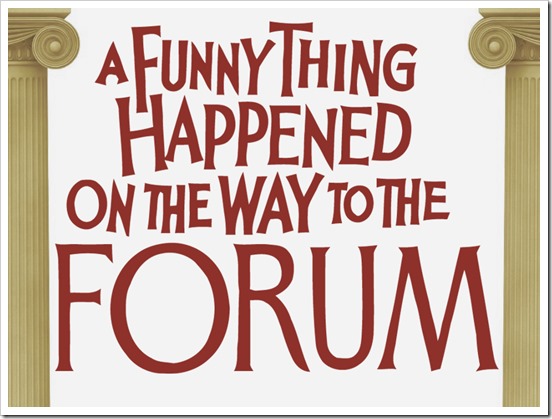 It premiered on Broadway in 1962 and went on to win the Tony Award for Best Musical, Best Book of a Musical and for Best Actor in a Musical (Zero Mostel). It was based on Pseudolus, a play by the ancient Roman playwright Titus Maccius Plautus.

The Chester Theatre Group’s production is a pure joy, with a talented cast and production staff (led by director, Kevern Cameron), supported by four fine musicians, plus excellent period costumes, and an impressive, attractive Roman set…with clever use of the Black River Playhouse’s limited space. (The theatre is “in the round” with about 100 very comfortable seats). 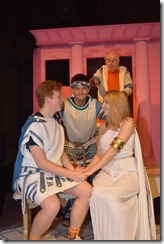 ﻿In the lead role of the slave Pseudolus, who will do anything to win his freedom, is Dale Monroe (center, right). Dale gives a standout performance deserving of Perry Award consideration. Regular CTG playgoers will remember his impressive performances in Doubt and The Elephant Man. As Pseudolus, he is the narrator, who In the opening provides the audience with this overview: "It all takes place on a street in Rome, around about these three houses. First, the house of Erronius, a befuddled old man abroad now in search of his children, stolen in infancy by pirates. Second, the house of Lycus, a buyer and seller of the flesh of beautiful women. That's for those of you who have absolutely no interest in pirates. And finally, the house of Senex, who lives here with his wife and son. Also in this house lives Pseudolus, slave to the son. Pseudolus is probably my favorite character in the piece. A role of enormous variety and nuance, and played by an actor of such... well, let me put it this way... I play the part."

The very talented cast includes TJ Reissner as Marcus Lycus, the friendly neighbor who maintains a 'house of pleasure', Leonard Klein is an audience favorite as the befuddled Erronius. He has been searching for 20 years for his kidnapped baby boy and girl. In the house of Senex are two community theater favorites: Steve Nitka as the henpecked father Senex and Judi Laganga, his domineering wife Domina. Their son Hero is played by young Sam Mullaney. 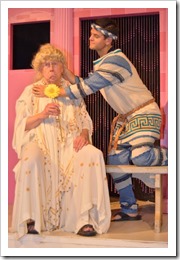 The chief household slave is Hysterium played to perfection by Jim Clancy, a master clown (photo left with Dale Monroe).  One of the funniest scenes is when he doubles for Philia and almost gets roasted for the effort.  The 'glorious' Roman Army captain Miles Gloriosus newly arrived from Crete with a contract with Lycus for the virgin Philia, is the fine voiced Thomas Courtright. Lauren Layfield is properly attractive as the naive Philia, also newly arrived from Crete. She and Hero provide one of the musical high points with the very funny "Lovely." The other showstopper number is "Everybody Ought to Have a Maid" performed by Senex, Pseudolus, Hysterium and Lycus.

Rounding out the A Funny Thing Happened on the Way to the Forum cast are the six lovely courtesans: led by Sky Spiegel Monroe (Dale’s wife), Cassandra Lindeblad, Kristina Meier, Lauren Santarelli, with Haley Witko and Rachel Lichter as the twins.  Plus the Proteans, three slapstick artists who have a romp filling the supporting roles such as Gloriosus' soldiers, Lycus' eunuchs, and Roman citizens Will Roper, Rory Hoban and a 30-plus year CTG veteran, Bob Sackstein.

At the core of the plot, young Hero falls in love with Philia, but she has been sold to Gloriosus who is to arrive soon to claim her. Pseudolus, personal slave to Hero, gets Hero to agree to give him his freedom if he can somehow arrange a happy ending that includes Hero's marriage to Philia. Pseudolus, of course, delivers, but to do so he has to outsmart Hero's parents, the slave-master, Lycus, and Miles Gloriosus...this results in mistaken identity, a riotous funeral, a parade of Lycus' scantily clad courtesans, a run over the seven hills of Rome by Erronius and a series of hysterical revolving door situations. This is a laugh-out-loud romp that the entire family will enjoy. 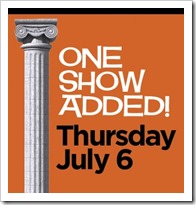 A Funny Thing Happened on the Way to the Forum performance schedule: Extra-Thursday July 6…Fridays and Saturdays at 8 pm and Sundays at 2 pm until July 16, 2017.