WHEN: July 13, 14, 15, 20, 21, and 22, 8 PM
WHERE: outdoor amphitheater at Pleasant Valley Park, Valley Road (next to the Veterans Hospital at Lyons), Basking Ridge
ADMISSION: Free but donations are gratefully accepted. Bring lawn chairs or blankets for seating. For information, call 908-204-3003.

Jesus Christ Superstar is directed by Jaye Barre with musical direction by Joe Lesky of Somerset and choreography by Mariella Klinger of Highland Park. 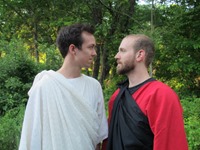 The musical tells the story of the last seven days in the life of Jesus of Nazareth (Troy Giel of East Orange) through the perspective of Judas Iscariot (David Seamon of Highland Park).  Told only through song and based loosely on the Gospels, the story also delves into the political upheavals of the day and the interpersonal struggles between Jesus and Judas.  Other main roles include Caiaphas (John Lamb of Randolph), Mary Magdalene (Isabel Pluchino of Far Hills), Herod (Joseph Schmidt of Bedminster), Pontius Pilate (John Wells), Annas (Frank Skokan of Bedminster), and Peter (Owen McKenna of Basking Ridge). [Left: Troy Giel  (Jesus) and David Seamon (Judas)]

Jesus Christ Superstar was conceived for the stage by John O’Horgan, with music by Andrew Lloyd Webber and lyrics by Tim Rice. The musical opened on Broadway at the Mark Hellinger Theater on October 12, 1971.  It ran for 711 performances and received five Tony award nominations. The show underwent three revivals, plus a filmed version in 1973.  Theatergoers will recognize the hit song “I Don’t Know How to Love Him,” sung by Yvonne Elliman, as well as “Everything’s Alright,” and “Superstar.”

The partnership of Trilogy Repertory and Bernards Township has produced over three decades of family entertainment and achieved several awards for both groups for excellence in theater programming.  Most prominent are the awards from ACT (Achievement in Community Theater) and the prestigious “Excellence in Cultural Arts Programming.”  “Jesus Christ Superstar” is made possible, in part, by support from New Jersey State Council on the Arts, and is presented through special arrangement with R & H Theatricals.