SECOND WEEK OF THE PRINCETON FESTIVAL BRINGS “MAN OF LA MANCHA,” A PIANO COMPETITION FOR YOUNG ARTISTS AND FREE EVENTS

SECOND WEEK OF THE PRINCETON FESTIVAL

Princeton Festival moves into its second week with a number of season highlights, including the multi-media event of a full orchestra playing popular Disney songs along with scenes from the movies; the opening of the musical Man of La Mancha; the finals of a competition for young pianists; and outstanding free lectures.

On Friday, June 9, at 8 pm in Richardson Auditorium the Princeton Festival Pops Orchestra strikes up the band for the first-ever Festival Pops concert. The 48-piece professional orchestra will play songs from Disney movies to match scenes from the films on a big screen. Disney in Concert: Around the World will be narrated by the acclaimed singer/actress and Princeton High School choral director Sarah Pelletier. She will connect the music with the movies. Rising young conductor, composer, arranger, and pianist Brian Eads will lead familiar, well-loved songs from The Little Mermaid, Mary Poppins, Beauty and the Beast, Pirates of the Caribbean and other favorites. 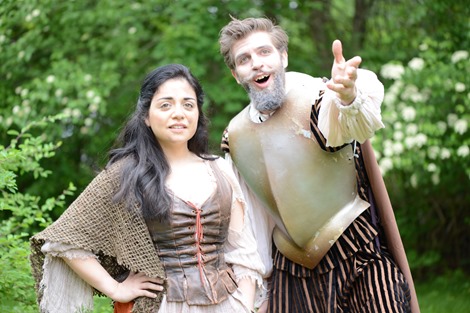 Man of La Mancha opens on Saturday evening, June 10, at 8 pm in Matthews Acting Studio at 185 Nassau Street, Princeton for the first of ten performances. Based on the classic novel Don Quixote by Miguel de Cervantes, this beloved musical follows Quixote as an old man nearing his death who fantasizes that he is a knight-errant striving to make a better world. He is driven by “The Impossible Dream” while he and his faithful servant Sancho Panza take to the road to battle evil and mankind’s wrongs. The adventures they encounter, comic and moving, are punctuated with songs such as “Dulcinea”, “It’s All the Same”, “Little Bird” and of course “The Impossible Dream.” There will be additional performances of Man of La Mancha on June 15, 16, 17, 22,23, 24 at 8 pm, with Sunday matinees on June 11, 18, 25 at 4 pm and a final Saturday matinee on June 24 at 4 pm.

It is not an impossible dream for nearly 200 accomplished pianists from age 6 to their early twenties who will compete for cash, trophies and glory in the Festival’s Competition for Young Artists. The Finals of the competition take place at 3 pm on Sunday, June 11, at the Clark Center, The Lawrenceville School. The Jacobs Music-sponsored event will honor winners and their teachers in six age categories. A free reception follows the final round.

New this year, the winner of the Grand Prize for the most outstanding performer in the competition will get a free trip to a Tanglewood Festival concert and master class, accompanied by a parent and a teacher.

This year’s Festival opera is Beethoven’s Fidelio, with performances on June 18 and 25. To expand their enjoyment of the opera, music-lovers can take advantage of three free talks during the week.

For more information and a link to ticket sales (handled by McCarter Theatre), visit www.princetonfestival.org. To purchase tickets by phone, call McCarter Theatre at 609-258-2787.