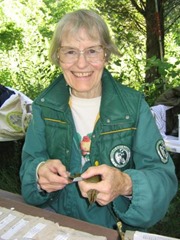 Dramatic black-and-white close-up portraits of Hannah Suthers and her legendary bird-banding process were made by this PDS senior and are on on view through June 16.

At the suggestion of PDS photography teacher Eileen Hohmuth-Lemonick, Erica followed Suthers and her team of volunteers and graduate students as they began their seasonal dawn patrol of migrating birds deep in a Sourland forest. Intimate views of rare species, briefly wrapped in mist nets, vie for attention with studies of Suthers’ intense gaze and venerable hands, as she directs capture and release. The all-seeing lens wielded by Erica also entered Suthers’ study, where she is licensed to rehabilitate injured or orphaned birds brought in all seasons.

The Featherbed Lane Bird Banding Station Important Bird Area is a research and monitoring project initiated by Suthers in 1977, and is among the longest-running bird banding stations in the United States.

Suthers, a retired Princeton University research assistant and writer, grew up in Hawaii and spent years as a missionary in Michigan and Brazil. The land she studies was preserved in part because neighbors became interested in the data she collected.

Erica Walsh began photography in her freshman year at PDS. She says she “is tremendously grateful for having been given this opportunity to learn during days spent helping Hannah.” She will continue her photography studies at Bard College in fall.

For decades, D&R Greenway has been preserving essential acres in Hopewell’s Sourland region. The name "Sourland" may derive from the soil, described as "sorrel-land" (reddish-brown); or perceived as “sour” because its rockiness renders cultivation difficult to impossible. Hikers report red fox, gray fox, coyote, and significant numbers and species of birds, especially passerines (perching birds). The ridge is studded with diabase boulders, deposited during the igneous event that produced both the New Jersey Palisades and the Watchung Mountains.

This contiguous forest sources essential water supplies, as well protecting and nourishing countless bird species. Hannah Suthers’ research proved the value of the Sourlands not only in breeding season, but throughout challenging spring and fall migrations. For decades, Suthers rode her horse along Hopewell’s Featherbed Lane, tallying birds in the changing forest, before commuting to Princeton University. Suthers’ spreadsheets maintained over many years became crucial evidence as D&R Greenway Land Trust and others began linking preserved open space along the Ridge. Bands affixed in the Sourlands were returned from Costa Rica, where crucial species flew to winter. Washington Crossing Audubon Society funds two bird-monitoring sites in central New Jersey and in Costa Rica, providing data on both breeding and wintering populations of vulnerable neotropical migratory songbirds.