Comedies—especially those by Shakespeare—are the perfect outdoor fare for summer. En plein air¸ the silly quotient rises, magic and incongruity feel almost normal, and we can lose ourselves for several hours in the opportunity to spend a few hours detangling mistaken identities and sorting out misunderstandings (or as the Bard calls them, misprisions) as we watch the mayhem escalate onstage.

Shakespeare’s comedies run the gamut from wacky farce (A Comedy of Errors) to dark, almost tragic (Measure for Measure). Lying somewhere between these two, A Midsummer Night’s Dream, one of his funniest and most accessible. The play's poetry is glorious and very funny. And as he pokes rude fun at what today would be a community theater production, Shakespeare has a grand time with "inside" theater jokes, much to our merriment—and, I suspect, his.

A Midsummer Night’s Dream is replete with loads of conflict, a plethora of physical and verbal humor, and zany performances showing that “the course of true love never did run smooth.” The plot itself is ludicrous. Driven by a tyrannical father, his daughter and her beau escape to the dark forest, another couple experiences unrequited love and there’s discord in the fairy kingdom occasioned by a marital spat between royal spouses. Misapplied love potions result in chaos—on the part of both mortals and fairies—until order is restored, three couples are wed and the “rude mechanicals” (read: common workmen) perform their play to celebrate the event. (Left: Earl Baker, Jr. and Felix Mayes)

Acting as director, set, costume and sound designer, STNJ Artistic Director Bonnie J. Monte has outdone herself for this production. Keeping the hilarity humming along at a brisk pace without letting the wacky high jinks get in the way of the dialogue or characters, she has invented a true otherworldly milieu. Fairy costumes, constructed of items normally found in a landfill (indeed, a neon sign marks the fairy kingdom as “Junk Yard”), transform trash into whimsical treasure: CDs sewn together to make Queen Titania’s cloak, what look to be credit cards strung together for Moth’s wings, gold lame for Mustardseed and varicolored flowers for Peaseblossom. The sprite Puck sports a Mohawk hairdo of multi-colored spikes, repeated as his epaulets. Rear stage panels revolve, from Greek-looking marble walls to glittery backdrops, again constructed of CDs. The Athenian mortals are dressed more conventionally, with Hermia’s youth accentuated by a party dress, culottes and sneakers; her adversary, the taller, more athletic Helena, bounds onstage in a tennis dress, along with a badminton racquet.

Nine actors portray 27 different characters, changing costumes backstage very quickly; the dressers are to be commended for their speed! Earl Baker, Jr. is majestic as Duke Theseus and petulant as the fairy king, Oberon who, when he doesn't get what he wants, throws a mega-tantrum that causes all the mayhem. A regal Vanessa Morosco (far right) is forceful as the duke’s new wife Hippolyta and the fairy queen Titania, both of whom refuse to be bullied by male privilege; however, she is quite tender as she strokes the head of the ass into which Bottom the weaver has been transformed. As Hermia’s dominating father Egeus and the rustics’ stage manager Peter Quince, Bruce Cromer brings an annoying pomposity to his portrayal of the former and enlists our compassion for the latter, a man trying to “herd cats” to mount the production of “Pyramus and Thisbe” for the duke’s nuptials.

The two sets of lovers are appropriately goofy making their bewitchment in the dark forest all the more credible. Courtney McGowan (Hermia) and Jonathan Finnegan (her boyfriend Lysander), and Nike Kadri (Helena) and the object of her unrequited love, Austin Blunk (Demetrius), give their characters just the right comedic touch. The two women are especially effective in a scene where Helena complains that all the men (read: Demetrius, for whom she pines) like Hermia because she’s petite while Hermia makes fun of Helena’s height. That Kadri is tall and McGowan a peanut makes their exchange about height even the funnier. And as Puck, a very agile Felix Mayes scampers and climbs around the stage like a circus acrobat as he carries out Oberon's missions and then has to right his mistakes. (Above L-R: Austin Blunk, Nike Kadri, Jonathan Finnegan, Courtney McGowan and Felix Mayes) 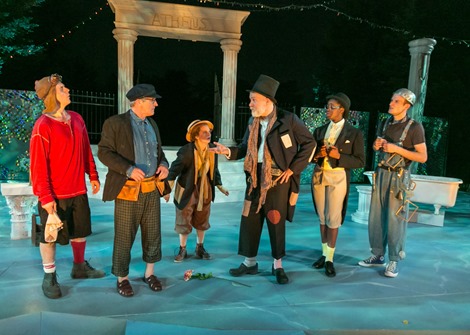 But the play's true comedic heart lies in the workmen who have come into the forest to get away from civilization to rehearse their play, which they hope to perform at the Duke's wedding the following day. Peter Quince (Bruce Cromer) tries mightily to control his rag-tag band, especially the obnoxious Nick Bottom (Ian Hersey) who is hilarious whether he's "auditioning" for every part in the play or whinnying with delight at the ministrations of Titania and her fairy attendants. Blunk, as Francis Flute, broadly plays a buxom Thisbe, complete with false breasts and high heels; Finnegan does double duty as Snout/Wall; Kadri’s Starveling/Man in the Moon and McGowan as Snug the Joiner/Lion deliver their silly lines with an aplomb appropriate to the seriousness with which they approach their efforts. McGowan’s depiction of Lion is funnier because of her short stature and feeble attempts to roar. The latter four actors also play fairies, along with Tyshon Boone, Katlyn Tilt and Joelle Zazz, all members of the 2017 Summer Professional Training Program. (Above L-R: Austin Blunk as Francis Flute, Bruce Cromer as Peter Quince, Courtney McGowan as Snug, Ian Hersey as Nick Bottom, Nike Kadri as Starveling, and Jonathan Finnegan as Snout.)

This is the third outdoor production of A Midsummer Night’s Dream that STNJ has mounted in the amphitheatre; the first two were streamlined, 90-minute versions, but this one’s two and a half hour running time seems to fly by. The current enchanting production magically reveals “what fools these mortals be,” and you’ll be a fool if you don’t grab your family and head over to the College of St. Elizabeth Greek amphitheater to catch the production before it closes on July 30. Performances are Tuesday through Sunday at 8:00 PM, with a special twilight performances on Sundays at 4:30 PM. The Theatre once again offers free tickets for young people 18 and younger. For information and tickets, call the box office at (973) 402-5600 or visit www.ShakespeareNJ.org online.