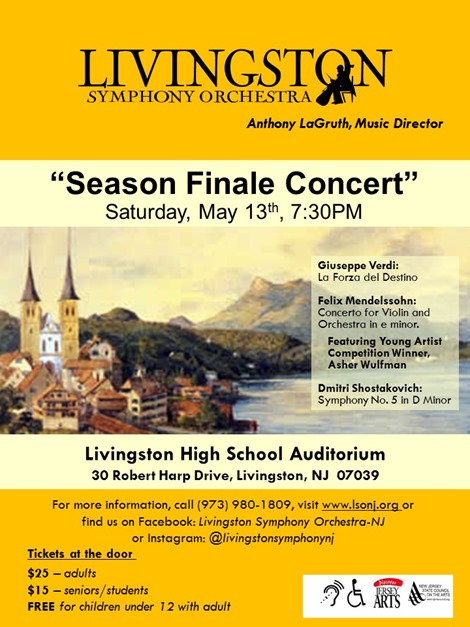 The Livingston Symphony Orchestra presents Princeton's Asher Wulfman in a lyrical performance of Mendelssohn's Violin Concerto. In addition to featuring the winner of its annual Young Artist Concerto Competition, the orchestra also explores the musical themes of fate, destiny and redemption with the overture to Verdi's "LaForza del Destino" and Shostakovich's "Symphony No.5"  as part 2016-2017's  Season Finale Concert.

The program is presented by an established group of dedicated, professional level musicians, and is led by a charismatic conductor in his second season with the orchestra. As always, Maestro LaGruth promises to bring his gifts for teaching and storytelling to an engaging performance.

In easily accessible suburban Livingston, the locale is handicapped friendly and has free adjacent, parking; assistive listening devices are available by contacting (973)980-1809 within two weeks of concert date. For more information on this evening and the non- profit Livingston Symphony Orchestra, please visit www.lsonj.org or call (973) 980-1809. 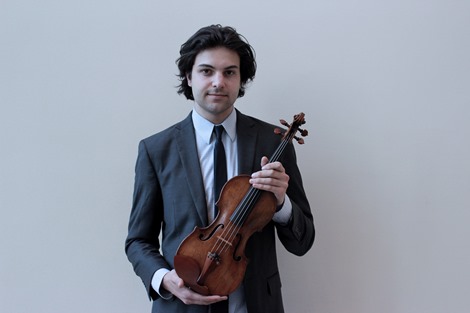 Asher Wulfman hails from Princeton, New Jersey. He currently studies with Professor Marilyn McDonald at Oberlin Conservatory and is pursuing degrees in violin performance and English. Before coming to Oberlin, he studied with Richard Amoroso of the Philadelphia Orchestra. He held the position of Assistant Concertmaster of the Philadelphia Youth Orchestra, and was concertmaster of the Princeton High School Orchestra. As a student at the Center for Gifted Young Musicians at Boyer College of Music at Temple University, he played alongside Philadelphia Orchestra members and performed in the Youth Chamber Orchestra. In 2013 and 2014, he was a recipient of the Center’s Dorothy Richard Starling Violin Scholarship. Asher has always found great joy in performing chamber music. He was a founding member of the Princeton High School String Quartet, which gave several public performances in the Princeton area. At Oberlin, he continues to play in chamber ensembles of high caliber: his string quartet was selected to perform in the prestigious Student Honors Recital. He has participated in several music festivals, including the Emmanuel Bach Institute Aria Project, Round Top Festival Institute, Methow Valley Chamber Music Festival, and Yellow Barn Young Artists Program.

Behind the Music… Audience members will be greeted with the overture to “La Forza del Destino,” a work commissioned late in the prolific opera composer Verdi’s career. Translations of this work include “The Force of Destiny,” “It Must have Been Fate,” and “Fate Conquers All.” From the beginning of this story, the opera’s hero Alvaro tries time after time to do what is right, but unfortunately faces outcomes that are quite the opposite of his intentions. Just as both he and his beloved Leonora are cursed by Leonora’s father, there are stories that productions of the opera itself have also been cursed, with mysterious power outages, scenery accidents and the onstage death of a prominent American baritone reported. In fact, the superstitious Pavarotti never performed the role. Nevertheless, the music itself is considered amongst the greatest of all overtures and a stand alone work which opens with a foreboding brass motif and later embraces its heroine’s gentle prayer.

Next on the program, Mendelssohn’s Violin Concerto in E minor has long been a virtuosic showpiece used to herald the truly great violinists. It stands as one of the most frequently performed violin concerti. Written in 1844 for the virtuoso Ferdinand David, Mendelssohn’s concertmaster and a close friend, the work introduces adaptations to the conventional concerto style of the time. For instance, Mendelssohn decided to write out the solo cadenza for David, which historically was left to the performer to improvise. The piece itself is an expressive masterpiece, with a sense of graceful lyricism throughout. Composed so as to not have a break between movements, the work is a most unique and enjoyable composition. As the featured soloist for this piece, the LSO welcomes this year’s Young Artist Competition Winner, Asher Wulfman. Asher has been chosen from a group of 14-21 year old artists from the tristate area who performed for orchestra panelists in January of this year, winning not only a scholarship, but the opportunity to perform with the orchestra. A nineteen year old Oberlin Conservatory student, Asher displayed outstanding technique, interpretation, and a musical promise which is sure to be embraced by the audience.

The concert concludes with Dmitri Shostakovich’s 5th Symphony, which came at a time of great uncertainty for the composer. Already considered one of the Soviet Union’s greatest composers, in 1937 Shostakovich was coming off the premier of his opera Lady Macbeth of the Mtensk District, which, though it was well received by the public, was unpopular with Stalin. This led Shostakovich to exist in an almost constant state of fear, as he knew the price paid by many who lost Stalin’s favor. So great was his fear, he rejected his own 4th Symphony in rehearsals and instead premiered the 5th, which he titled “A Soviet Artist’s Response to Just Criticism”. Instead of writing the piece in the approved, ultra-nationalist style, the 5th Symphony embodied Beethoven’s style, the only non-Russian composer to survive the musical ban. Still, it met the requirements outlined by Stalin: heroic themes, inspiration from Russian literature and a flowing lyricism. However, since its premier, many critics have asserted that the heroic and celebratory themes of the final movement are hollow, intent to convey to the listener a sense of false happiness and a condemnation of the government. Regardless of the composer’s intent, the music was found to be acceptable by Stalin’s standards and granted Shostakovich a peace of mind that allowed him to continue to compose.