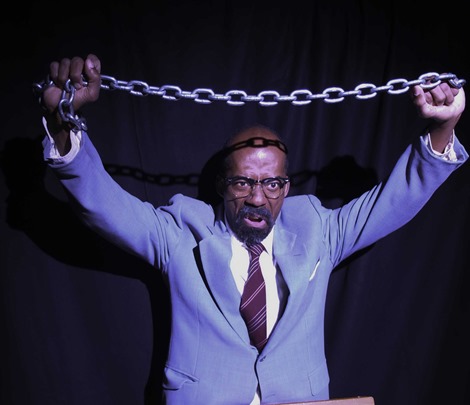 W.E.B. Du Bois—writer, scholar, and one of the earliest civil rights leaders – comes to life in the New Jersey premiere of W. E. B. DU BOIS:  A Man for All Time, presented by Jersey City Theater Center (JCTC).

“If there is one thing Du Bois dedicated his life to, it was disrupting the status quo,” said Alexa Kelly, writer and director of W. E. B. DU BOIS: A Man for All Time.  “As he  says in the play,  ‘if one is an activist, and not considered dangerous by the powers that be, then one is not doing one's job, and I was studiously doing my job!’”

Kelly is adamant that her play and the work of Du Bois speaks to the current Trump era. “When things are not morally healthy for the people of the country and the world, one has, in a Democracy, the obligation to disrupt!” she added.

One of the most significant—and all to often overlooked—disruptors in American History, Du Bios becomes part of Disruption, the thematic series presented by Jersey City Theater Center (JCTC) that runs through June. Through visual arts, theatre, readings, performances and music, JCTC explores topics global in scope yet relevant to the community. Disruption—the current thematic series by JCTC, which runs through June— looks at the personal, social and political impact of our present era of disorienting change. “We are very excited about bringing this show to JCTC’s Disruption series,” said Kelly.

W. E. B. DU BOIS:  A Man for All Times has been performed in the U.S. and Europe to great acclaim. According to Olga Levina, Artistic Director, JCTC, the writings and life story of Du Bois as conveyed through this extraordinary play are perfectly aligned with the Disruption theme.

“As a social thinker and philosopher, Du Bois was far ahead of his time,” said Levina. “He didn’t accept the social realities of his time and fought for justice his entire life. Even though society seems to have come a long way,  we still need Du Bois to disrupt some of the realities of injustice and prejudice today. The life and work of Du Bois seems as relevant to now as it was during his lifetime. ”

A black American born three years after Lincoln's Emancipation Proclamation —just after the Civil War ended—Du Bois broke many boundaries, such as being the  first black student to  graduate from Harvard and the first black Sociologist. Du Bois  also studied in Europe, ran for senator, co-founded the NAACP, participated in the founding of the United Nations, fought  tirelessly in support of anti-lynching laws and  for Civil Rights for all people. He also wrote the classic and influential studies,  Souls of Black Folk and Black Reconstruction  in America.  Du Bois may have lived much of his life in during America’s Jim Crow era, he also lived to  see segregation declared unconstitutional and he died in Africa – on the eve of Dr. Martin Luther King's March on Washington.

Du Bois was far ahead of his time in  support of women's rights, the right for all people to have work, free college education and universal medical coverage. Many historians and civil rights scholars believe Du Bois is not as well as known as he should because he was labeled a communist by Senator McCarthy during the 1950s Red Scare. In fact, Du Bois was a mentor to Dr. Martin Luther King, Jr., who famously declared,  "history cannot ignore W.E.B. Du Bois.”

W. E. B. DU BOIS:  A Man for All Times is a riveting drama as well as an inspirational journey of a great man’s life through nearly a century of social unrest and political upheaval. The show has been performed both in the U.S. and Europe, including a critically acclaimed  performances at the New York International Fringe Festival and the  Edinburgh Festival Fringe where it ran for 21 shows. Other performances include:  The Victoria and Albert Museum, London (20 shows),  The Du Bois Library, Amherst, University of Massachusetts, Mahaiwe Theatre, Great Barrington MA, The National Black Theatre Festival and colleges and libraries throughout the U.S. The show even toured Holland, including a special performed for Queen Beatrix.

Rave reviews include New York Theatre Magazine: "It’s one of the accomplishment of this solo show that it makes accessible both the man himself and some of his ideas. The creative team works to make the pioneering scholar and uncompromising activist come off as somebody you might want to have a drink with—without sanding smooth the edges of his anger or his intellect."

Brian Richardson, who plays W.E.B. Du Bois, was born in Belize and raised in Trinidad and Tobago. He began acting in Trinidad in 1981 and is now based in New York. Richardson has appeared in television, including Law & Order and Luhrmann's The Get Down and film, including Time out of Mind, Coming to America, Hunger and Sid's New Glasses.  His extensive theater credits include Harlem Summer Shakespeare, where he has appeared as  Macbeth; Prospero in The Tempest, Malvolio in Twelfth Night; and Jacques in As You Like I as well as other NYC productions—Night Must Fall, The Lower Depths, and Race.  Richardson has also performed with Bristol Riverside Theatre, Barter Theatre, The Metropolitan Playhouse, The Bushnell Theatre and J City Theatre.

Alexa Kelly (Playwright/Director), born and raised in London, studied at The Royal Central School of Speech and Drama. After visiting the U.S.,, she taught acting in North Carolina hosted a television series for PBS in Florida, where she also ran a drama program at the men's Federal Correction Institution in Tallahassee.  For three years, Kelly taught acting and directing for at University of Michigan in Ann Arbor,  then moved to NYC where she  founded Pulse Ensemble Theatre with Gary Garrison (Artistic Director for the Directors Guild of America), and Kevin Willmott  (screen writer for Spike Lee's Chiraq),  and has been its artistic director ever since.  She has directed regionally and taught and/or directed at University of North Carolina. Florida State University, Adelphi University and Tisch School of the Arts. (>alexaKellydirector.com.)

Pulse Ensemble Theatre, established in 1989 is one of the oldest ensemble theatre companies in New York City. Pulse operated 2 performance spaces on Theatre Row, until their building was razed for the new Signature Theatre complex.  Pulse is committed to two major productions a year: one Harlem Summer Shakespeare a site-specific outreach project, and one new script from its weekly Playwrights’ Lab. (pulseensembletheatre.org)