“RADIO JERSEY,” NEW RADIO SHOW TO DEBUT ON MAY 1ST 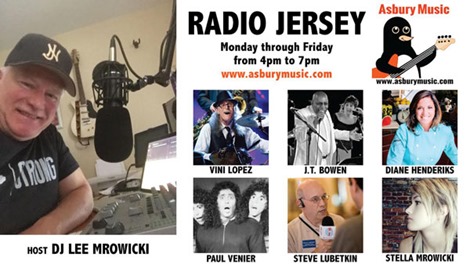 The legendary DJ Lee Mrowicki has assembled a star-studded supporting staff for a new show called “Radio Jersey” which will broadcast each weekday on AsburyMusic.com and be heard around the world.  Covering everything from Sinatra to Springsteen, “Radio Jersey” will showcase the Garden State like never before.

“Radio Jersey” is set to air Monday through Friday from 4pm to 7pm (EST), starting May 1st.  Along with Mrowicki spinning the tunes, the show will include special features such as stories by Rock and Roll Hall of Fame member Vini “Mad Dog” Lopez and R&B legend J.T. Bowen (from the Red Bank Rockers).  The daily show also features news with Steve Lubetkin; funny stuff from Paul Venier, (the “Comedy Tornado”); culinary and nutrition tips from Chef Diane Henderiks; and weather updates from Stella Mrowicki.

But most of all there is music and lots of it. Many of the biggest names in music history came from the Garden State and “Radio Jersey” will play them all. The list includes names like Frank Sinatra, Bruce Springsteen, Bon Jovi, the Isley Brothers, Dionne Warwick, the Four Seasons, and Blondie.  “Radio Jersey” will spin them alongside tracks by the Gaslight Anthem, the Smithereens, Southside Johnny, Glen Burtnik, John Eddie, and newer artists like Deal Casino and the Battery Electric. From the biggest names to those starting out the scene today, nobody knows Jersey music like Lee Mrowicki.

Mrowicki has been a staple in the Jersey Shore music scene ever since he joined WJLK in the seventies.  He first shined a spotlight on the Asbury Park music scene when he hosted the national broadcast of Southside Johnny & the Asbury Jukes record release party from the Stone Pony.  That concert not only introduced the country to the Jukes, but featured guest appearances from Bruce Springsteen, Ronnie Spector, and E Street Band members Steven Van Zandt, Clarence Clemons, and Max Weinberg, as well as New Orleans legend Lee Dorsey.

The Jukes show also served as the beginning of a long relationship with Mrowicki and the club, earning him the name “the legendary voice of the Stone Pony.”  Mrowicki continues to DJ there and in clubs around the Jersey Shore. He began broadcasting on AsburyMusic.com when he took over the “Beyond the Palace” show from station manager Gary Wien.

“With the weekly program ‘Beyond the Palace’ I try to bring attention to the talented musical community not only in Asbury Park, but throughout the entire state of New Jersey.  And now, I have the opportunity to continue that on a daily basis with ‘Radio Jersey.’  I feel a responsibility as a longtime member of the musical community to play the music of many of New Jersey’s talented performers not only Springsteen, Bon Jovi, and the Jukes.  This will be an extension of the weekly program on a daily basis and feature New Jersey music… the slogan being ‘All Jersey—All the Time! on Radio Jersey.’”

AsburyMusic.com can be heard on any PC or mobile device.  The station is also available on the popular TUNE IN app.  In addition to “Radio Jersey” the station broadcasts a mix of new indie music, Americana, classic rock, unique cover songs, and 80s rock with a heavy dose of the Garden State.  Over 8,000 songs are in the station’s regular playlist, which is curated and changed each month by Gary Wien.