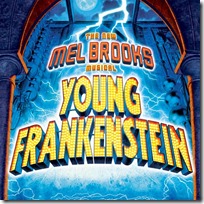 WHEN: April 27 through May 7
WHERE: Sitnik Theater of the Lackland Performance Arts Center, 715 Grand Ave., Hackettstown
TICKETS: $20.00 for adults and $10.00 for children under the age of 12.  For more information or to purchase tickets visit www.centenarystageco.org or call the Centenary Stage Company box office at (908) 979-0900. The box office is open Monday- Friday from 1pm- 5pm, and opens two hours prior to every performance. The CSC box office is located in the Lackland Center, 715 Grand Avenue Hackettstown, NJ. Centenary Stage Company can also be found on social media platforms Facebook, Twitter and Instagram.

With a book by Thomas Meehan and music and lyrics by Mel Brooks, Young Frankenstein opened on Broadway in 2007 and won the Outer Critics Circle Award for Outstanding New Broadway Musical.  It was hailed by critics from the New York Post to the LA Times as being dazzling, funny, and glitzy and “classic Brooks.”

Grandson of the infamous Victor Frankenstein, Frederick Frankenstein (pronounced "Fronk-en-steen") inherits his family's estate in Transylvania. With the help of a hunchbacked sidekick, Igor (pronounced "Eye-gore"), and a leggy lab assistant, Inga (pronounced normally), Frederick finds himself in the mad scientist shoes of his ancestors. "It's alive!" he exclaims as he brings to life a creature to rival his grandfather's.  Eventually, of course, the monster escapes and hilarity continuously abounds.  Every bit as relevant to audience members who will remember the original as it will be to newcomers, Young Frankenstein has all the of panache of the screen sensation with a little extra theatrical flair added with such memorable tunes as "The Transylvania Mania," "He Vas My Boyfriend" and "Puttin' on the Ritz."

The production is directed by CSC Artistic Director & Centenary University Chairman of the Fine Arts Department, Carl Wallnau and Assistant Professor of Theater/Dance and director of CSC’s Young Audience Series, Lea Antolini-Lid.  Wallnau has directed numerous productions including the world premieres of Inventing Montana, The Tillie Project and The Poetry of Pizza, as well as, the American premiere of A Laughing Matter and the New Jersey premieres of Below the Belt, Square One, Rounding Third, and Marvin’s Room.  Antolini-Lid’s performance credits include most recently, Peter Pan, Mary Poppins & A Christmas Carol all at Centenary Stage Company.  Other performance credits include, Floyd Collins and States of Independence at American Musical Theatre Works, The Importance of being Ernest at the New Repertory Theatre in Mass, and many recent productions at The Growing Stage Theatre Co, where she also choreographs and teaches.  Music direction by Jarred Lee, a vocal coach and pianist whose Broadway credits include American Psycho, On the Twentieth Century, and Something Rotten

Young Frankenstein will be performed by NEXTstage Repertory, Centenary University Theater Department’s student based Performance Company under the auspices of the Centenary Stage Company.  NEXTstage Repertory provides students with the opportunity to perform along-side the production standard of a fully operational professional regional theater.  The Centenary University Theater Department has been in existence for 17 years and has continued to grow and expand, now boasting a musical theater concentration.  Students are able to earn a Bachelor of Arts degree in Theatre with concentrations in Costume Design, Dance, Performance Studies, Production Management, Technical Theater and Musical Theater.

The 2016- 17 season of performing art events at the Centenary Stage Company is made possible through the generous support of the Geraldine R. Dodge Foundation, the NJ Sate Council on the Arts, the Shubert Foundation, the Blanche and Irving Laurie Foundation, the Sandra Kupperman Foundation, and CSC corporate sponsors. These include Premier Season Sponsor Heath Village Retirement Community, Silver Sponsor Hackettstown Medical center, Home Instead Senior Care (Washington), The Holiday Inn in Budd Lake, Fulton Bank of New Jersey, as well as Centenary Stage Company members and supporters.