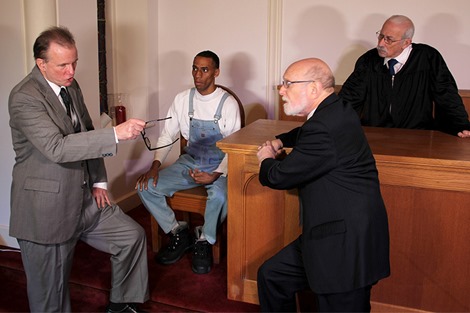 To Kill a Mockingbird

WHEN: Fridays, March 17 and 24 at 8 p.m.; Saturdays, March 18 and 25 at 8 p.m.; and Sundays, March 19 and 26 at 2 p.m. A reception with the cast and crew follows the opening night performance on March 17.
WHERE: Kelsey Theatre located on Mercer County Community College’s West Windsor Campus, 1200 Old Trenton Road.
TICKETS: $18 for adults, $16 for seniors, and $14 for students.  Tickets for “The Secret Life of Harper Lee" are $15 for all.
Tickets for both shows are available at www.kelseytheatre.net or by calling the Kelsey Theatre Box Office at 609-570-3333. Kelsey Theatre is wheelchair accessible, with free parking available next to the theater.

Based on the Pulitzer Prize-winning 1960 novel by Harper Lee and adapted for the stage by Christopher Sergel, the story of tomboy Scout Finch unfolds as she observes her father, lawyer Atticus Finch, take on the most controversial case of his career. Set in the fictional town of Maycomb, Alabama, in 1935, Atticus is preparing for the trial of Tom Robinson, a young Black man unjustly accused of raping a young white woman. As Atticus strives to prove Tom’s innocence against daunting odds, Scout learns about the imperative to do what is right over what is easy. These lessons in courage, compassion and hope are ones that she – and the audience – are unlikely to forget.

Director Ruth Markoe is excited to bring this production to Kelsey Theatre. “When this book was released, it had particular resonance due to the growing Civil Rights Movement. It speaks to issues we still face in America today – inequality, justice, hopelessness and the need for compassion.” As Atticus says in the play, ‘You never really understand a person until you consider things from his point of view... Until you climb inside of his skin and walk around in it.’”

Theater To Go will present a fascinating companion piece on Saturday, March 25 at 2 p.m. when acclaimed actress Prudence Wright Holmes presents a solo show, “The Secret Life of Harper Lee.” Lee was a reclusive figure and, in this solo show, audience members will learn of her close relationships with her father and her childhood friend, Truman Capote, both of whom ultimately broke her heart. Lee did not publish another book until the controversial “Go Set a Watchman” in 2015.

Holmes has appeared in numerous films and Broadway productions alongside some of today’s most well-known stars. She wrote and performed her critically-acclaimed solo show Bexley, OH! at New York Theatre Workshop. She is currently touring her solo show, “Call Me William, the Life and Loves of Willa Cather,” as well as her interactive murder mystery, “Agatha is Missing.” This show originated in NYC and is touring regionally.