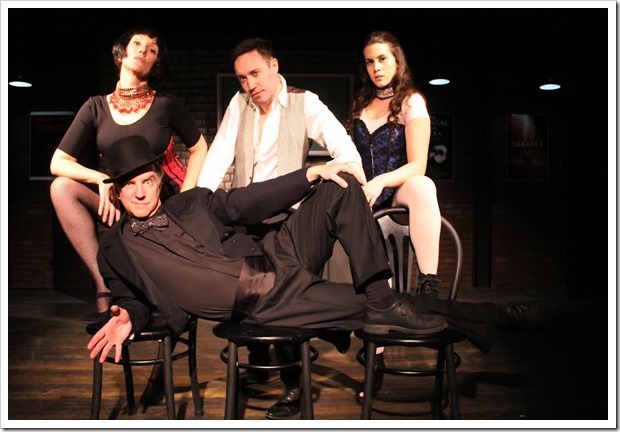 The Women’s Theater Company is currently presenting Musical of Musicals (The Musical), written by Joanne Bogart (lyrics) and Eric Rockwell (music), The production is billed as “a hilarious satire of musical theatre.” Guess what? It is…hilarious, it is…a satire, it is…a parody of the classics of musical theatre. If these composers and their shows mean nothing to you----Rodgers and Hammerstein, Stephen Sondheim, Kander and Ebb, Andrew Lloyd Webber, and Jerry Herman, then you may fail to appreciate the clever, funny parody presented in The Musical of Musicals (The Musicals)

One of our best area directors (and choreographers) Lauren Moran Mills has produced a truly superior production of The Musical of Musicals (The Musicals)…truly the equal to the best of “Off-Broadway.” Where has this musical gem been hiding? (more later). The creators (and original NY cast members), Joanne Bogart and Eric Rockwell, tell the story of the young ingénue who is constantly repeating to her villainous, lecher of a landlord (aren’t they all?) the classic line of a struggling actress (aren’t they all) ‘I can’t pay the rent!’ The sad tale, always with a happy ending, is told five times via an oh so clever parody of the five composers.

In each, 15 to 20 minute, segment we have four characters, the aforementioned ingénue and landlord, plus the young leading man and the older woman. The cast is wonderful; the young actress is nicely played by the fine voiced, attractive newcomer Jenna Rose (Ravenda); the young man Billy, the hero of the piece, is another newcomer, Zachary Mazouat. He is perfect in this role of the imperfect, slightly bumbly, suitor who charms his way to victory (translation: He gets the girl).

Now we come to the two professionals in the cast: the landlord, played with considerable gusto, by another area favorite, Scott McGowan. Scott nails the dastardly villain in his own parody of the baddie from the melodrama The Damsel in Distress. Billed as the Matron, or older woman, is the exceptionally talented, Patricia Durante. Barbara Krajkowski, a certified NJ theater treasure, Artistic Director of the WTC, first introduced us to Patricia several seasons ago in Enchanted April. Since then she has earned ‘standing ovations’ on stages throughout the NY, NJ and PA region. We bestowed a New Jersey Footlights ‘Best Actress’ award for her Always, Patsy (Patsy Cline), also, produced by Barbara and the WTC. Her broad impersonations of Marlene Dietrich and Gloria Swanson are comedy gems. Both Scott and Patricia display great ability to perform with tongues firmly planted in their cheeks. Their obvious pleasure in these roles contributes immensely to the fun.

Now, what is a musical without music? The musical director and lone musician is Deborah Martin. Her piano performance deserves its own round of applause.

The unique fun, for many, in this play is the recognition of the shows and tunes that are being parodied. Thus, we will avoid the temptation to burden you with too much, pleasure robbing, detail. This is a wonderful way to spend two hours. Cast and crew have much to be proud of. Maybe, the best thing I can say to entice you to share in the enjoyment at the little theater in Parsippany, is to reveal that my wife has been on Facebook and the phone sharing her pleasure. Oh yes, you will love the bonus finale. 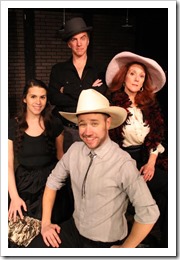