CIRCLE PLAYERS PRESENTS “next to normal”

next to normal
book and lyrics by Brian Yorkey
music by Tom Kitt
directed by Richard Butler of
musically directed by Nicholas Kaminski of South Amboy
Jennifer Robinson of Highland Park serves as stage manager. 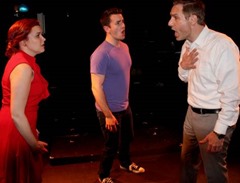 An instant classic that won three 2009 Tony Awards including Best Musical Score and the 2010 Pulitzer Prize, this powerful rock musical presents an unflinching look at a suburban family struggling with the effects of mental illness. It is a groundbreaking contemporary musical about a family in crisis struggling for normalcy.

Appearing in the cast are Ali Gleason of Lacey as Diana;  Keith White of Jersey City as Dan; Kelly Baron of Milford as Natalie; Evan Krug of Edison as Gabe; Nick Buonvicino of Green Brook as Henry; and Thomas Young of Somerset as Dr. Madden.

Audiences are invited to join in a special wine and cheese reception in the theater lobby following the opening night performance.