Long before Europeans arrived in what is now New Jersey and Delaware–in the early 17th century—the Lenni-Lenape lived in the states’ forests and shores, making full use of the area resources. But their lifestyle, strange to the Europeans, engendered cultural conflict and war, and the diseases, guns and alcohol they brought with them created an impossible situation for the Lenni-Lenape to survive in their homeland. Many converted to Christianity and assimilated into the dominant white culture, leaving only a small remnant to carry on the sacred tribal traditions, often in secret.

The Lenni-Lenape themselves may be invisible to modern Jerseyans, but they live on in the dubious world of high school (and professional) team mascots and logos. One, in particular, represents the Warriors of Chipeekany High School in Cumberland County and has aroused the ire of a young Native American woman and provided a subject for Nikkole Salter’s new play, Indian Head, now receiving its world premiere at Luna Stage in West Orange. 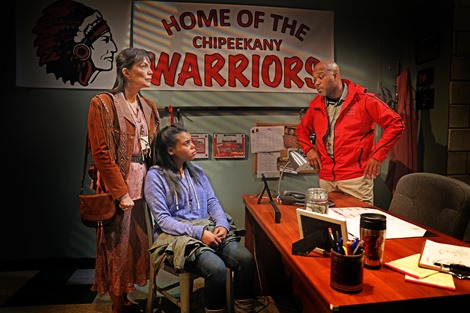 Another of Salter’s plays to have been “ripped from the headlines” (the other was Lines in the Dust, also produced by Luna Stage), Indian Head confronts head-on the hurtful effects of oblivious discrimination and appropriation of another culture’s symbols—in this case, in the name of sport. In addition to the team’s being called the Warriors, football plays are named after famous Native Americans (Crazy Horse, Geronimo) and indicated by huge placards held up to tell the quarterback what to run next. When Rachel Murray spray paints her high school’s new scoreboard, her mother Patricia cuts a private deal with the football coach to punish the young woman by having her serve the team as Equipment Manager for the remainder of the season. She also gets the coach to agree to her teaching the players about the Lenni-Lenape culture. Having her teenage daughter teach the boys sounds like a good idea, but the scheme backfires when Rachel sabotages the lesson and the star quarterback steals a war bonnet (called a roach) and wears it in a pre-game ceremony involving a pseudo-Native American dance performed with a sacred feather spear. An examination of the psychological trauma from a misuse of cultural customs ensues, leading to a grudging understanding between the two cultures. (Above L-R: Carla-Rae as Patricia Murray, Sydney Battle as Rachel Murray, Donavin Dain Scott as Coach Jeff Smith. photo by Christopher Drukker)

What feels like a dynamite subject for a play (especially given the recent controversy swirling around the dismissal for political correctness) garners high marks for topicality, although the play’s over-long second act, exacerbated by Kareem Fahmy’s leisurely direction, and long stretches of wordy, didactic dialogue blunt the dramatic tension. Actually more interesting than the culture clash that is the main theme are several subconflicts: mother vs. daughter, youthful protest vs. older caution, the team’s need for an inspiring mascot vs. an understanding of how hurtful such a choice can be to another.

On a multi-venue set designed by Tina Pfefferkorn and Libby Stadstad and lit by Jorge Arroyo, a quartet of accomplished actors bring Salter’s idea to life. Donivan Dain Scott is avuncular football coach Jeff Smith,  who considers Chipeekany H.S. his home and the players his family. The Indian head has been the school’s insignia since he played there decades ago, and in the name of tradition, he balks at the questions raised and protest waged against its continuance. His adult nemesis, Patricia Murray, is portrayed with mild manners and reticence by Carla-Rae. After a traumatic event at a youthful protest, Patricia seems to have gone underground, to try to change minds through education while continuing to observe her tribal rituals on the down low. Both adult actors deliver Salter’s dialogue convincingly and naturally; the characters they portray are nuanced, but it falls to them to educate the audience about their respective cultures. 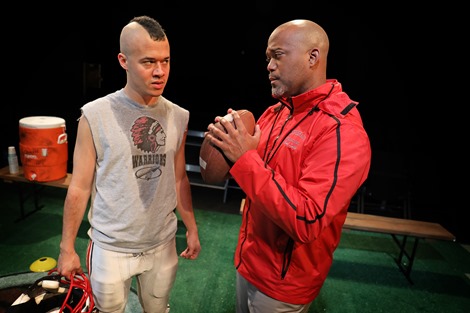 But it is the two young actors who really ignite the stage and bring the play to life. Ollie Corchado (above, with Donavin Dain Scott) as Brian Kelly, anxious for his team to win the seasonal championships so he can get a scholarship to college, is a gung-ho quarterback, filled with enthusiasm for the game, his school and the mascot. He has no idea that performing a war whoop and fake Indian dance is disrespectful to an entire culture; he gets kudos for being willing to be taught and change his ways. Sydney Battle is fierce as an angry Rachel Murray, battling not only her school but her mother’s inclination to “go along to get along,” her tendency to avoid public confrontation. Battle’s sulky expression aptly conveys typical adolescent attitude, but her resentment stems from more than teenage angst.

Deborah Caney’s costumes lend a strong feeling of verisimilitude to the production: uniforms bearing the number, player and team names for the athletes; leather jacket, prairie skirt and Native American accessories for Patricia Murray. Sound designed by Mark Van Hare, complete with cheering crowds and peppy cheerleader voices, really makes us feel as though we are in a stadium during a football game.

It may take awhile to get there, but Indian Head makes some very important observations about the mindless misuse of cultural symbols and its effect on those from whom they are appropriated. Confronted by a lack of political correctness, it’s easy to say, “Get over it,” but to do so is to deny the resulting psychological damage that hearing and seeing such insults can produce. Some judicious tightening up of the script and brisker direction will go a long way to making this “teachable moment” more accessible and dramatically satisfying.

With all this talk about immigration, it’s important to note that the Lenni-Lenape are the Original People of New Jersey and should be respected instead of being rendered invisible because they were defeated. In 2001, the U.S. Commission on Civil Rights called for an end to the practice of using American Indians as mascots, logos and nicknames of schools and universities. In New Jersey, 76 schools still use Native mascots. More work is needed to right this wrong. Thank you to Luna and Nikkole Salter for bringing this injustice to our dramatic attention.

Indian Head will be performed at Luna Stage, 555 Valley Road, West Orange, through Sunday March 5. Performances are Friday and Saturday evenings at 8 PM and Sunday afternoons at 3 PM. For information and tickets, call 973.395.5551 or visit www.lunastage.org online.