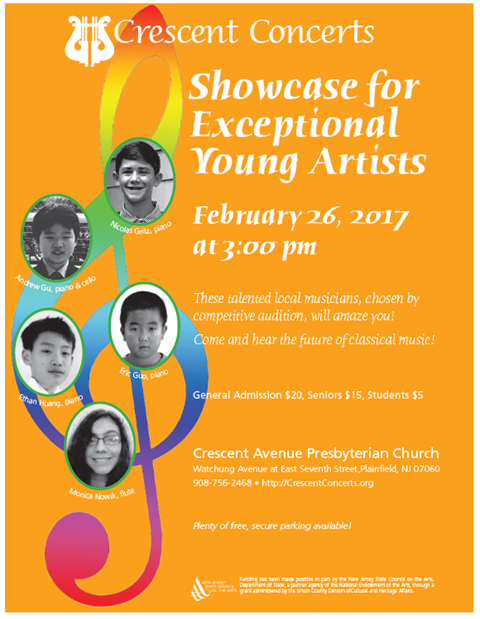 WHEN: Sunday, February 26 at 3:00 pm
WHERE: Crescent Avenue Presbyterian Church Sanctuary, 716 Watchung Avenue, Plainfield
Ample free, secure parking in Church lot (Entrance on 1st Place - connected to church by walkway)
TICKETS: General Admission-$20, Seniors-$15, Students-$5.
Tickets may be purchased at the door the day of the concert, or are available during normal business hours at the Crescent Avenue Presbyterian Church office. Please call 908-756-2468 or visit http://crescentconcerts.org/ for more information about this and upcoming concerts.

Crescent Concerts opens 2017 with its annual showcase of exceptionally talented young musicians from New Jersey.  The five young artists selected this year will perform great works of classical music in the splendor of the neo-Gothic Crescent Avenue Presbyterian Church in Plainfield:

Andrew Gu, age 11, is a sixth grader at the William Annin Middle School in Basking Ridge, NJ, who studies piano and cello.  He has won several piano competitions, including the International Young Artist Piano Competition, the Greater Princeton Steinway Society Piano Scholarship Competition, and the New Jersey Music Teachers Association Young Musician Competition.  He is also the principal cellist of his school orchestra.  He will be performing piano works by Bach and Chopin, as well as a cello piece, for which he will be accompanied by his brother, Albert.

Eric Guo, age 14, is a freshman at Milburn High School who has been studying piano since 2008.  In 2015, he was awarded the Gold Prize on Music-Fest's Rising Talents Festival.  He has performed at Curtis Institute of Music, Philadelphia, and last summer he attended the Honors Music Institute at Penn State University.  He will be presenting pieces by Chopin, Bach, Schumann, and Rachmaninoff.

Ethan Huang, age 13, is an eighth grader at Frelinghuysen Middle School in Morristown who has been studying piano since he was six.  He has won first place in the Piano Solo and Concerto Competition at the Festival "Musica in Laguna", as well as numerous other awards.  He made his piano concerto debut at the age of seven, and has performed in Carnegie Hall, Steinway Hall and Auditorium San Nicolo (Italy).  He will be presenting pieces by Scarlatti, Beethoven, Chopin, and Medtner.

Monica Nowik, age 14, has studied flute for eight years.  She has been picked for the Wharton Student Competition Judge's Choice award, and played second chair in the Regional Band.  She currently plays with the New Jersey Youth Symphony Orchestra.  She will be performing a sonata by Schubert, and will be accompanied by her mother, Martha.