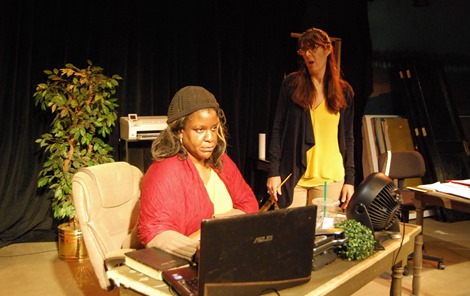 WHEN: Friday, February 10th, through Sunday, February 12th; Friday and Saturday evening performances begin at 7:30pm, and the Sunday matinee begins at 4:00
WHERE: Baird Theatre on Three, 5 Mead Street, South Orange
TICKETS: Online tickets are discounted at $20 at www.interactproductions.org/rasheeda.  All tickets purchased at the box office in person are $25, and are available starting an hour before curtain.

Rasheeda Speaking, written by Joel Drake Johnson, is a tense dark comedy set in a doctor's office. Two co-workers--Jaclyn, who is black, and Ileen, who is white--are driven apart by the machinations of their biased boss, Dr. Williams. A power struggle ensues that spins wildly out of control, and racial differences only add fuel to the fire. As The New York Times put it, it's a social-issue play infused with a psychological thriller... and it keeps you in its palpable grip until the final moment!

A portion of the proceeds will go to the South Orange/Maplewood Community Coalition on Race, founded in 1996, to support their mission to achieve and sustain the benefits of a thriving, racially integrated and truly inclusive community that serves as a model for the nation. They are a nationally recognized non-profit organization committed to building a unique, suburban community that is free of racial segregation in housing patterns and community involvement. Visit their website twotowns.org for more information.

Founded in 2009, interACT has been bringing theater to the community for eight seasons. Rasheeda Speaking is their first production of 2017, and there are two more shows happening during this 2016-2017 season: Pride & Prejudice in March, and Sister Act: The Musical in May.