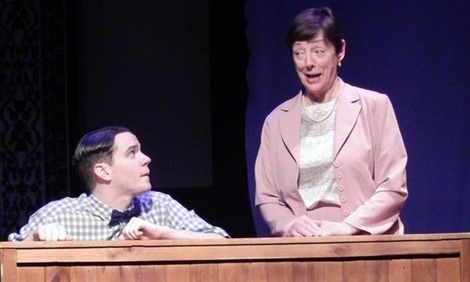 Pop Up Theater—performances in unexpected places—continues in Union’s Downtown Center when The Theater Project presents a script in hand performance of Jeffrey Hatcher’s quasi-autobiographical comedy, MRS. MANNERLY, hailed by the Houston Chronicle as “the most ingenious and hilarious new play of the year."

As a boy in 1960s Ohio, Hatcher endured etiquette classes taught by a lady with a very mysterious past. No one had ever discovered her secret, until her best student—Hatcher—decides to turn detective. Jason Gillis plays Jeffrey and all his little classmates, and Noreen Farley  is the mysterious lady. A clip of their performance is available at TheTheaterProject.org.

MRS MANNERLY is part of a series of Pop Up theater events sponsored by a Union County HEART grant and Union’s Downtown Improvement District, designed to bring more foot traffic to the township’s central business district. This year’s series has been hosted by Unity Bank in their Stuyvesant Avenue branch, with the support of the Union Chamber of Commerce. The Theater Project has added a directory of Union Center eateries to its website to encourage audiences to explore the area.

The Theater Project, an award-winning company that has just celebrated its 22th anniversary, presents its main stage season at the Burgdorff Center in Maplewood. It offers many programs, including classes for kids and showcases for new writers, in Essex and Union Counties, all on display at their web site.