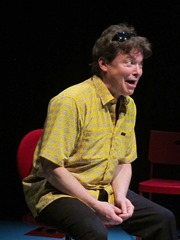 Dreamcatcher Repertory Theatre introduces a new community Book Club, beginning with the February production of Shipwrecked! An Entertainment: The Amazing Adventures of Louis de Rougement (As Told by Himself).  For each of its three annual Main Stage shows, Dreamcatcher will offer an audience the opportunity to read the script before the show, then participate in a talk-back experience with the actors and creative team where audience members can discuss in depth the choices that the director made in interpreting the play for the stage.

On Sunday, February 26, the audience is invited to begin the theatre day at noon for an optional bring-your-own-lunch to discuss the book with other patrons before the 2pm matinee.  Audience talkback with the director and actors will following immediately after the show, and will focus on how the production was brought from the page to the stage, and how the results differed (or didn’t) from what you imagined.  There is no additional charge for this special event. Patrons are invited to come alone, or to make it a book club event and come with all your members.

Scripts may be purchased at Mondo Summit, 426 Springfield Avenue in Summit, or online Dramatists Play Service.  Tickets for the book club event can be purchased here.  Use discount code BOOK for $3 off the ticket price on regular, student and senior tickets.

This comedy, written by Pulitzer-Prize Winner Donald Margulies, is receiving its New Jersey premiere. The adventurous Louis de Rougemont invites you to hear his amazing story of bravery, survival and celebrity that left nineteenth-century England spellbound. Dare to be whisked away in a story of the high seas, populated by exotic islanders, flying wombats, giant sea turtles and a monstrous man-eating octopus. Shipwrecked! examines how far we're willing to blur the line between fact and fiction in order to leave our mark on the world. During its run in Los Angeles, it was called "a deft literate narrative folded into a vaudevillian romp." (Los Angeles Times)

Performances are at Oakes Center, located at 120 Morris Avenue in Summit. Parking is available in the lot behind the theatre at 20 Ashwood Avenue and at the Summit Recreation Center, 100 Morris Avenue. The facility is wheelchair accessible. Assistive listening devices for the hearing impaired and advance large print scripts are available for free by prior arrangement.