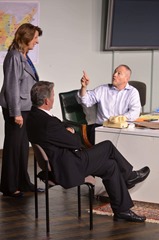 Political plays—especially comedies—can be tricky to write. The problems of relevancy, satire, realism pose a quagmire for the playwright. Written by Robert William Sherwood, first produced in London in 2007 and set in the election year 2000-2001, Spin tackles American politics. The play tells the tale of two spin doctors in a ruthless presidential primary campaign who lock horns on the eve of a major debate over what to do with rumor of a sex scandal involving the questionable past of a candidate’s wife. (Left: Meredith Johnson and Tom Morrissey listen as Jonathan Fishman tells them what he’s going to do with the rumor.)

What might have seemed quaint in 2007 takes on a new and deeper meaning in this fractious, contentious election year—adding to both the hilarity and sober assessment of just what might go on behind the public political curtain. That the Women’s Theater Company has tackled the play with gusto, energy and polish is a tribute to the troupe’s fearlessness and appreciation for their audience’s intelligence. 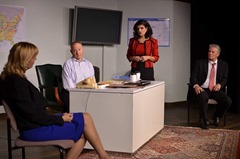 Evasion is the name of the game in Spin. When Mary, the opposing candidate’s campaign manager, merely hints at sordid information she has about his client Henry Champlain’s wife, Champlain’s caffeine-crazed campaign manager Jerry goes ballistic as he attempts to discover the substance of the rumor, its source and whether he can prevent the press from publishing it. Mary offers no solid information, and like a pro Alexandra Champlain avoids definitive answers to Jerry’s probing questions—using the same techniques Jerry has advised Henry to use when addressing abortion or welfare! By the time the lights come down, everyone has been spinning, figuratively and almost literally, so that when Henry reaches the breaking point, he reveals a side of his character that turns him from an “outsider” to a political “insider.” (Above: Lauren Moran Mills questions Nancy Kutzer as Fishman and Morrissey listen.)

Barbara Krajkowski directs with vigor, keeping the action and dialogue careening along the road of cynicism. Jonathan Fishman is superb as hyperactive Jerry, talking a breakneck speed, jumping around the office, hurling obscenities with abandon, all while attempting to get Henry to avoid going “off script.” He’s well matched by Nancy Kutzer as collected, ruthless Mary, who holds her cards close to her chest and gleefully watches Jerry twist in the wind she’s created by innuendo. She comes across as even more callous than her male counterpart! The third member of this political triangle, Henry’s pollster Elizabeth, is played with equal cold-blooded élan by Meredith Johnson; she struggles valiantly to get Jerry to temper his anger and calmly consider how to get out of this jam while not having his candidate drop out and accept a spot on the ticket as vice-president. 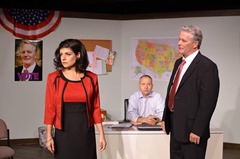 Lauren Moran Mills (left)does a fine job as the calculating Alexandra, her secretiveness about her past almost palpable, but her evasions cloud our assessment of her. Mills plays her as unruffled, cold. Is she the spouse who pushed and prodded a passive husband up the political ladder, or is she a calculating former call-girl? That we never really find out the rumor and its truth means she remains an enigmatic character—more the fault of the playwright than the actor. As for Henry Champlain, played by Tom Morrissey (above right), he’s such a passive character that one wonders why anyone would think he is presidential material. He sits quietly, responding neither to his wife’s revelations about her unsavory past nor her confrontation with Mary about the rumor the latter has heard and making his final decision a surprise. Morrissey’s Henry neither wrestles with the information nor smolders during its revelation. Played so flatly, the character is more cardboard than convincing.

The set, a campaign office, is unremarkable, much as we imagine a field office to be. Todd Mills’ lighting signals the end of scenes in this 90-minute play, and the projections of phrases superimposed on a shredded American flag are echoed in the dialogue. Frances Harrison’s costumes are generally appropriate to the characters, although dressing Alexandra in red and black undercuts Alexandra’s attempt to overcome her questionable past. Perhaps white would have communicated that better.

Spin is a comedy for this campaign climate of innuendo, sordid sex accusations and a candidate who tends to ignore the teleprompter and go with his gut. Henry Champlain may be no Donald Trump, but Jerry and Mary provide a glimpse of the contortions campaign managers must go through to be successful. It’s not a pretty sight, but as Jerry says, “Campaigns would be perfect if there were no candidates.” To be sure.

Spin will be performed at the Parsippany Playhouse, 1130 Knoll Road, Lake Hiawatha, through October 23. Performances are Fridays and Saturdays at 8 PM and Sundays at 3 PM. For information and tickets, call 973.335.3038or visit www.womenstheater.org on line.