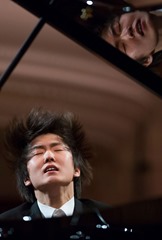 Seong-Jin Cho was brought to the world’s attention in October 2015 when he won First Prize at the Chopin International Piano Competition in Warsaw. Four years before he had won Third Prize at the Tchaikovsky competition, aged only 16. In September, 2008 at the age of 14, he won the First prize at the sixth Moscow International Frederick Chopin Competition. In November, 2009 he won the First prize at the seventh Hamamatsu International Piano Competition in Japan (youngest winner in its history).With his overwhelming talent and natural musicality, Seong-Jin Cho is rapidly embarking on a world-class career and is considered one of the most distinctive artists of his generation.

Seong-Jin Cho is part of the bergenPAC 2016-2017 Classical Arts Series with subscription services. For a low annual subscription fee of $20, Cultural Arts

Guidelines for the subscription service are as follows: Subscription fee does not include cost of tickets. Tickets to a minimum of four performances must be ordered when purchasing your subscription. $20 Subscription fee waived for PACCESS Red Level Members and above. Restrictions apply. Offer cannot be combined with any other promotional offers. Offer is not retroactive to previously purchased tickets. Offer may be modified and can be revoked at any time. Artists, programs, dates, and ticket prices are subject to change.

To subscribe and order tickets, call the Subscription Manager at (201) 816-8160 x24 or email classicalarts@bergenpac.org.