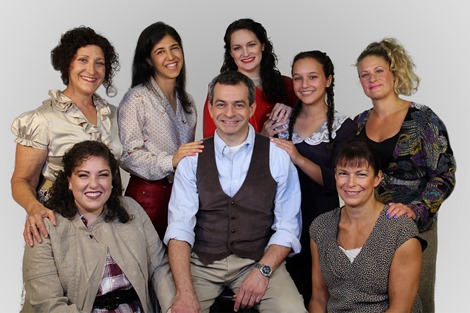 WHEN: Fridays, Sept. 30 and Oct. 7 at 8 p.m.; Saturdays, Oct. 1 and 8 at 8 p.m.; and Sundays, Oct. 2 and 9 at 2 p.m.
WHERE: Mercer County Community College's (MCCC's) Kelsey Theatre, 1200 Old Trenton Road., West Windsor
TICKETS: $18 for adults, $16 for seniors, and $14 for students/children and may be purchased online at www.kelseytheatre.net or by calling the Kelsey Box Office at 609-570-3333.
Kelsey Theatre is wheelchair accessible, with free parking next to the theater.
For a complete listing of adult and children's events, visit the Kelsey website or call the box office for a brochure.

Modern relationships have never been messier than for Jake, a novelist who finds more success in his career than his life.

This wildly comic and sometimes touching play features Jake’s flashbacks about the women in his life – that are occasionally interrupted by the actual women! Jake's women include a revered first wife, Julie, who died years earlier in a tragic accident; his daughter, Molly, who is recalled as a child but is now a young woman; his boisterous and bossy sister, Karen; an opinionated analyst, Edith; his current wife, Maggie, who is contemplating her future with, or possibly without, Jake; and the newest arrival, Sheila, a woman who just may be part of Jake’s future.

The cast features Kurt Penney of Pennington as Jake; Erin Leder of Bordentown as Maggie; Michele Kallman of Hightstown as Karen; Makenna Katz of West Windsor as young Molly; Gina Migliaccio of Hamilton as older Molly; Laurie Hardy of Hamilton as Edith; Jessica Braynor of Lawrenceville as Julie; and Cathy Liebars of Langhorne, Pa., as Sheila.

The show is directed by Diana Gilman Maurer, co-founder of MPO with her husband, John Maurer. She notes that “Jake’s Women” is considered one of Mr. Simon’s hidden gems and that the cast for this production is proving very talented at juxtaposing moments of high comedy and high drama.

“The show is both moving and funny, and takes you on a roller-coaster ride of emotions,” Maurer said. “I am really proud of this cast and how well they navigate the moods and nuances of each character.”

Maurer is co-producing the show with John Maurer. Other members of the production team are Set Designer Jeff Cantor, Lighting Designer M. Kitty Getlik, and Sound Designer Judi Parrish. Costumes are by Anthony Remer; the stage manager is Rosie Karlin.