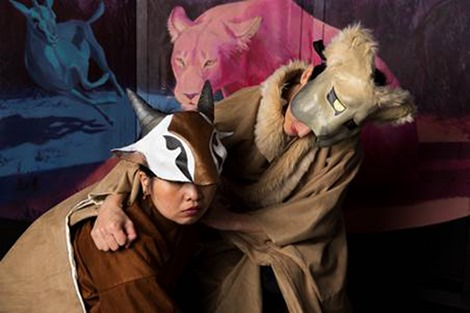 WHEN: Saturday, Sept. 24 at 2 p.m. and 4 p.m.
WHERE: Mercer County Community College’s (MCCC’s) Kelsey Theatre on  the college’s campus, 1200 Old Trenton Road, West Windsor
TICKETS: $10 for children, students and seniors, and $12 for adults. Tickets may be purchased online at www.kelseytheatre.net or by calling the Kelsey Box Office at 609-570-3333.
Kelsey Theatre is wheelchair accessible, with free parking available next to the theater.

A children’s opera about an unusual and enduring friendship between a lioness and an antelope, BELOVED PREY is based on classic Japanese Noh theater and was composed by MCCC alumnus Kento Iwasaki (’09), a graduate of West Windsor-Plainsboro High School North who now lives and works in New York City. Presented by The Traveling Opera Company, the one-hour show features Iwasaki and five other musicians, who blend traditional Japanese instrumentation, including the koto, with stylized dance movements and colorful masks and costumes. The music will be accompanied by silhouettes of the show’s singers projected on a screen behind the main stage. (Above: A lioness forms an unlikely friendship with an antelope in “Beloved Prey,” a one-hour children's opera based on Japanese Noh theater.) 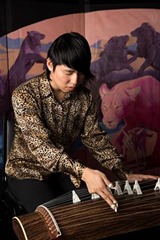 Iwasaki notes that the opera’s diverse elements combine for a spellbinding performance. “The story mixes the natural world with a sense of the mythological,” he said. “I hope that young audiences and their families will enjoy the variety of influences and come away with a memorable experience of live theater.”

Iwasaki’s “portable opera” concept is drawing attention and praise. It was recently featured on JapanCulture•NYC, New York City’s No. 1 blog for Japanese culture. Last year, he performed songs from “Beloved Prey” at the Ikebana International’s AKI NO KOKORO: Autumn Portraits in Ikebana & Koto in New York and was interviewed for the program A Tempo, hosted by Rachel Katz of WWFM The Classical Network.

After earning his MCCC degree in Liberal Arts with a concentration in Music, Iwasaki transferred to Temple University, where he earned his bachelor’s degree in Music Composition. He then completed his master’s in Classical Composition from the Manhattan School of Music.