WATER BY THE SPOONFUL
by Quiara Alegría

WHEN: July 14-31, Thursdays and Fridays at 8:00 pm, Saturdays at 3:00 and 8:00 pm, and Sundays at 3:00 pm.
WHERE: Zella Fry Theatre, Kean University, 1000 Morris Ave., Union
TICKETS: $30 standard, $20 for senior citizens and Kean alumni, and $15 for students and patrons with disabilities.
Significant discounts for groups of 8 or more apply.
To make reservations or to order a season brochure, please call the Kean Stage Box Office at 908-737-SHOW (7469) or visit Premiere Stages online at www.kean.edu/premierestages.

Tickets are also available for Premiere Stages’ exclusive Water by the Spoonful Opening Night Party on Friday, July 15. This event features a pre-show party with wine and hors d’ oeuvres at the four-star farm-to-table restaurant Enoteca Ursino, admission to the performance, and a post-show champagne toast and dessert reception with the cast. Tickets for this exclusive event are just $55.00, and may be purchased by calling 908-737-7469.

In this stirring portrait of redemption and forgiveness, Elliot, an Iraq War vet, and his cousin Yazmin, a recent divorcee, search for a way out from the shadows, while Odessa, Elliot's estranged mother, struggles to keep her new online family of fellow addicts stable and sober. As the fractured family negotiates the limitations of loyalty, friendship, and community, they also discover acceptance and grace in a play The New York Times heralded as a “moving collage of lives in crisis” when it premiered in New York at Second Stage Theatre in 2013. 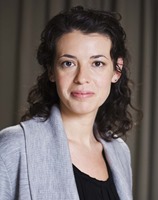 A native of West Philadelphia, playwright Quiara Alegría Hudes previously collaborated with Hamilton’s Lin-Manuel Miranda on the Broadway musical In the Heights, which received the 2008 Tony Award for Best Musical, garnered Ms. Hudes a Tony nomination for Best Book of a Musical, and was a 2009 Pulitzer Prize finalist. Water by the Spoonful, the recipient of the 2012 Pulitzer Prize for Drama, is the second play in Ms. Hudes’ acclaimed “Elliot trilogy,” which also includes Elliot, A Soldier’s Fugue (a finalist for the 2007 Pulitzer Prize for Drama), and The Happiest Song Plays Last. Her other works include the plays 26 Miles and Yemaya’s Belly and the children’s musical Barrio Grrrl!

“We are proud to present this important and fiercely contemporary play to New Jersey audiences for the first time,” stated John J. Wooten, producing artistic director of Premiere Stages. “Opioid dependency has become an epidemic in the state, and Quiara’s characters are uniquely compelling in their ability to challenge and inspire us to take a fresh perspective on the increasingly significant issue of addiction.”

Additional topics and dates include Water by the Spoonful in Rehearsal & Performance with Ms. Haney (Sunday, July 24 at 3:00 pm), and Technology & Community Building (Saturday, July 30 at 3:00 p.m.) with Dr. Mary Chayko, Director of Undergraduate Interdisciplinary Studies at Rutgers University’s School of Communication and Information. Premiere will also offer a series of informal pre-show talks every Saturday evening 45 minutes prior to performance in the lobby of the theatre.

Founded in 1855, Kean University has become one of the largest metropolitan institutions of higher education in the region, with a richly diverse student, faculty and staff population. Kean continues to play a key role in the training of teachers and is a hub of educational, technological and cultural enrichment serving nearly 15,000 students. The Nathan Weiss Graduate College offers four doctorate degree programs and more than 60 options for graduate study leading to master’s degrees, professional diplomas or certifications. The University’s six undergraduate colleges offer 50 undergraduate degrees over a full range of academic subjects. With campuses in Union and Toms River, New Jersey, and Wenzhou, China, Kean University furthers its mission by providing an affordable, accessible and world-class education. Visit Kean online at www.kean.edu.