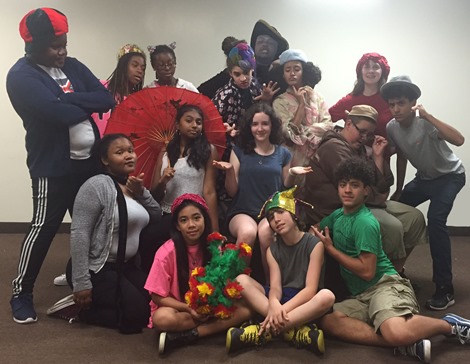 JAMES AND THE GIANT PEACH JR.

New Jersey School of Dramatic Arts invites you on a “peachy” musical adventure with the cast of “James and the Giant Peach Jr.” brought to you by Summerstage Camp at NJSDA.

Roald Dahl's James And The Giant Peach is a wonderfully fun musical for the whole family! Featuring a “master-peach” of a score by the TONY Award-nominated team of Pasek and Paul (Dogfight and A Christmas Story The Musical) and book by Timothy Allen McDonald (Roald Dahl's Willy Wonka, The Musical Adventures Of Flat Stanley). When James is sent to chop down their old fruit tree, he discovers a magic potion which results in a humongous peach - and embarks on a wild, amazing adventure of large proportions!

Director Mikaela Kafka is excited to be back for her third year of directing NJSDA’s summer camp production. Kafka has been working professionally as an actress and director for over 20 years. Her directing credits include HONK!, The Little Mermaid, Bugsy Malone, Into the Woods, High School Musical and Charlie Brown. As an actress Mikaela has received rave reviews from the New York Times (“great comedic timing”) and Talkin’ Broadway (“beautifully performed”). She was also nominated by the Star Ledger for the 2007 Best Actress of New Jersey Award. In addition to this, Mikaela has appeared in productions by the New York International Fringe Festival, Centenary Stage Company, Garage Theatre Group. Pittsburgh Playhouse and New Jersey Dramatists.

Musical direction for the production is headed by Terri Gorgone of Rutherford. Gorgone has been with New Jersey School of Dramatic Arts for several years and had worked with the school with productions including Rent, Little Mermaid, HONK!, Shrek the Musical, Once Upon a Mattress, 13 the Musical and several others.

Founded in 2004, the New Jersey School of Dramatic Arts has provided comprehensive professional acting training for adults, teens and children. More than 1,200 students, some of whom have gone on to pursue professional acting careers, have taken classes at the school since it opened ten years ago.