Sometimes an otherwise rational character does something so illogical that you just want to shout at the stage. In the world premiere of Sandy Rustin's play STRUCK, for example, aspiring actress Vera (Susan Maris, above) is hit by a bicycle while trying to cross the street. She limps into her apartment accompanied by Nate (Adam Bradley, above), her attorney husband, to reveal a bloody gash and a bruise on her leg the size of Staten Island. Vera didn't file a police report, not wanting to get the biker (Benjamin Puvalowski, below, far right) in trouble.

She also refuses medical attention, despite her husband's suggestion. In no time she is up on her feet (in high heels) preparing to welcome the reckless cyclist, who appears repentant for his careless driving. It isn't long before the couple's lives then take a terrifying turn—one that might have been avoided had Vera done what logical people do. But... this is a play, not real life. Your tolerance for smart people doing stupid things will determine your level of enjoyment of the intermission-less 90 minutes that follows.

New Jersey Repertory bills the play as a “serious comedy about a (possibly) cosmic event” which sounds like Vera might (possibly) be abducted by joke-telling aliens. Director Don Stephenson takes the “serious comedy” part quite seriously, infusing the action with high energy and a quick pace. To top off the play's comic aspirations, Rustin introduces a stock character from sitcom-land, the wacky next door neighbor. In STRUCK she's a Texas-born metaphysical healer and all around kook named Vicky.

Everything that Vicky says is funny—if only because she says it with a twang. It helps that the character is in the very capable hands of Jenny Bacon (above, center), who makes Vicky's frequent non-sequiturs (seriously) believable. Maris, Bradley, and Puvalowski are also quite good—taking the characters down the tricky path that Rustin and Stephenson have laid out for them. 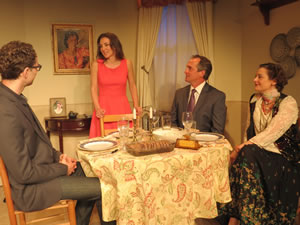 The play's jocular tone takes a turn for the sentimental in the second half, which is where the condensed running time (seriously) undermines both story and character development. Rustin introduces a fifth character, Bertrand (played by Matthew Shepard(right, second from right), whose identity cannot be revealed here without accusations of spoilers. But suffice it to say the only comedy (serious or otherwise) after Bertrand's arrival is derived from Vicky's inappropriate romantic aspirations. As usual, New Jersey Rep lavishes Rustin's script with a top-notch production, but you'll need to suspend logic in order to avoid being STRUCK by reality."

Thanks to Rick Busciglio of www.njfootlights.net for sharing this review!