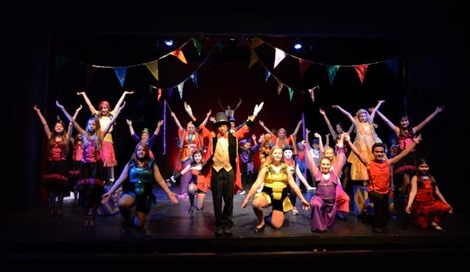 WHEN: August 5 through August 14
WHERE: the Little Theater, Centenary College, Hackettstown
TICKETS: $12.50 for adults and $10.00 for children under 12.  Tickets are available on – line at centenarystageco.org or by phone at (908) 979 – 0900.  The Centenary Stage Company box office is open Monday through Friday from 1 – 5pm and two hours prior to every performance.

Celebrating over 20 years of acclaimed musical theatre training for young thespians, the Centenary Stage Company’s Young Performers Workshop returns with the annual Summer Festival of Shows. These talented young thespians between the ages of 8 and 18 will present a variety of musical theater favorites including Do Black Patent Leather Shoes Really Reflect Up?, Merrily We Roll Along, Miss Nelson has a Field Day, The Dark at the Top of the Stairs and the One-Act Festival.

Do Black Patent Leather Shoes Really Reflect Up?
With music & lyrics by James Quinn and Alaric Jans, a book by John R. Powers and based on the novel by John R. Powers, this musical captures the funniest aspects of youthful growing pains and the trying moments of adolescence.  Focusing on eight children during their Catholic elementary and high school education in the 1950s, this delightful musical tickles the funny bone of anyone who ever went to school, public or private.

Merrily We Roll Along
Stephen Sondheim and George Furth expertly blend the excitement and energy of a backstage musical with a poignant and emotional contemporary story about the importance of staying true to one's ideals.  Merrily We Roll Along begins in the present and moves backwards, tracing the lives of wealthy, jaded composer Franklin Shepard and his two estranged friends through each milestone of their personal and professional lives (good and bad). The show ends with a touch of rueful irony, as the three best friends at the start of their careers face a bright future: young, talented and enthusiastic about the worlds waiting to be conquered.

Miss Nelson has a Field Day
Adapted by Joan Cushing from the famous children’s novel by Harry Allard and James Marshall Miss Nelson has a Field Day is the snappy sequel to Joan Cushing’s beloved musical “Miss Nelson is Missing!”.  The Smedley Tornadoes have not only never won a football game, they have never scored a single point! Coach Armstrong goes bonkers and Miss Nelson decides to help out.  She enlists Coach Viola Swamp to whip the team into shape and save the day.

The Dark at the Top of the Stairs
Written by William Inge, The Dark at the Top of the Stairs is a drama set in a small Oklahoma town in the early 1920s.  The story follows the Flood family and is told through a series of short stories — the fight between a husband and wife, the fear of an overly shy young girl on going to a dance, the problems of an introverted little boy who feels that the whole world is against him, the corroding marriage of Cora's rowdy sister, and the tragedy of a military school cadet who suffers from the stigma of being a Jew in an alien community. There is dark at the top of everyone's stairs, but it can be dissipated by understanding, tolerance, and compassion.

One-Act Festival
Finally, the Young Performers Workshop will be presenting their annual One- Act Festival on Saturday, August 13 at 11am and Sunday, August 14 at 11am.  The One – Act Festival features a selection of short plays selected to be performed in rep.  One – acts are directed by YPW staff and/or students and feature an entire YPW student cast.

The YPW program has been led by Broadway, film and television veteran, Michael Blevins, for over 20 years. YPW is dedicated to the enrichment of young lives through experience in the theatre arts, and serves as a venue for cultivating young theatre performers. The program is one of only a handful in the nation that offers both formal training and production experience for young people.