STAGED READING OF “PLAY IN PROGRESS” @ NJPAC ON JUNE 24

WHEN: Friday, June 24th, at 7:00 p.m.
WHERE: Chase Room at NJPAC, One Center St., Newark
ADMISSION: Admission to the reading is $5, and proceeds will benefit NJSEEDS, an organization that changes the lives of motivated, high-achieving students from low-income families by transforming their educational opportunities.

New Jersey Theatre Alliance, in partnership with New Jersey Performing Arts Center (NJPAC) and Newark Celebration 350, invites the public to a reading and discussion of Surely Goodness and Mercy, one of three new plays by New Jersey playwrights about New Jersey issues commissioned this year through the NJPAC Stage Exchange program.

The play is about Tino, a fictional Newark school boy who is sent to live with an abusive aunt after his mother dies protecting him in a street fight. Tino befriends the cantankerous lunch lady at his school who has been diagnosed with multiple sclerosis (MS) and has difficulty getting the healthcare she needs. The two unlikely friends band together to help each other navigate a world of violence, privation, and injustice.

“The play that I’m working on is about Newark, New Jersey,” said Hutchinson. “I’ve been able to plug into the community that’s around me, right here, and it’s vibrant and rich. I’m feeling a lot of local love, and I get to give back that love. The Newark community will see themselves reflected on stage and have their existence validated as significant and important. In the play there are some poor folks, some black folks, some curmudgeonly folks, some old folks, some angry folks. You’ll get a glimpse into the lives of people who are under-represented in theatre.” 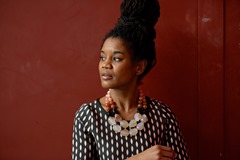 The event includes a reading of the script by professional actors, followed by a panel discussion and open Q&A, where audience members can share their perspectives on the many issues addressed in this play: children living with abuse, adults living with MS, and the experiences of low-income families in Newark. Panelists include playwright Chisa Hutchinson; Stuart Cook, MD, the Ruth Dunietz Kushner and Michael Jay Serwitz Chair in Multiple Sclerosis and Director of the MS Diagnostic Treatment Center at Rutgers – New Jersey Medical School; Rosemary S. McGee, a humanities scholar and medical humanities faculty member at Morristown Medical Center; Dr. Ellen Anthony Moore, an assistant professor of theatre arts at Marymount Manhattan College; and Sharon Zucker, Dean of Guidance at NJ SEEDS.

As part of the NJPAC Stage Exchange program, Hutchinson is working with Writers Theatre of New Jersey, a professional theatre organization in Madison, NJ, that will present a full-scale production of Surely Goodness and Mercy in 2017.

About NJPAC Stage Exchange: The Commissions
Now in its second season, NJPAC Stage Exchange: The Commissions (NJStageX) is collaborating with three professional New Jersey theatres to commission and produce new plays by a talented trio of Garden State playwrights. Following their staged readings at NJPAC in the spring of 2016, each new work will receive a full production during the 2016-17 season at the partner theatres. The selected playwrights and theaters include David Lee White and Passage Theatre Company (Trenton); Nikkole Salter and Luna Stage Company (West Orange); and Chisa Hutchinson and Writers Theatre of New Jersey (Madison). More information is available at: njtheatrealliance.org/NJStageX-2016.

There is a strong community engagement component to NJStageX with proceeds from the staged readings going to New Jersey-based non-profit organizations and institutions whose missions complement themes and issues addressed in the plays. Each reading will be followed by a free symposium, made possible by a generous grant from the New Jersey Council for the Humanities, where the playwright will be joined on stage by a panel of academics, activists and professionals to discuss the issues in the play.

About NJPAC
New Jersey Performing Arts Center (NJPAC), located in downtown Newark, New Jersey, is among the largest performing arts centers in the United States and is the artistic, cultural, educational and civic center of New Jersey—where great performances and events enhance and transform lives every day. NJPAC brings diverse communities together, providing access to all and showcasing the state's and the world's best artists while acting as a leading catalyst in the revitalization of its home city. Through its extensive Arts Education programs, NJPAC is shaping the next generation of artists and arts enthusiasts. NJPAC has attracted more than 10 million visitors (including over 1.5 million children) since opening its doors in 1997, and nurtures meaningful and lasting relationships with each of its constituents. To learn more: njpac.org

About Newark Celebration 350
Newark Celebration 350 (NC 350) is a year-long jubilee of unique events and festivities commemorating the 350th anniversary of the city of Newark’s founding. Over 150 marquee programs will highlight the city’s rich history, remarkable achievements, diverse communities and extraordinary culture presented by a unique coalition of citizens, educational institutions, cultural organizations and community groups. This spectacular “festival of festivals” aims to inspire and excite locals and visitors from around the world by showcasing the best of this great American city. For a schedule of events: nc350.org