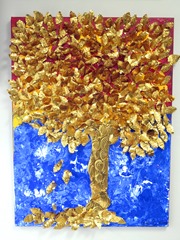 Saving Fruitful Trees is a juried exhibition sponsored by the Jewish Federation of Northern New Jersey's (JFNNJ) Partnership2Gether initiative. The show, which will feature both American artists and artists from JFNNJ’s “sister city” in Nahariya, Israel, will be on display June 1-30 at the Waltuch Gallery at the Kaplen JCC on the Palisades. (Top: Gila Bretter, Golden Tree)

All works in the exhibit reflect the artists’ interpretation of a compelling theme taken from the Jewish text Devarim 20:19-20, which states: “All trees that produce edible fruit must not be destroyed, even during times of conflict, so they can provide nourishment and sustenance for future generations.” The goal in choosing a specific concept relating to the Torah is to assure that local artists and those in Israel are all inspired by a common thread of thought to connect to their work. 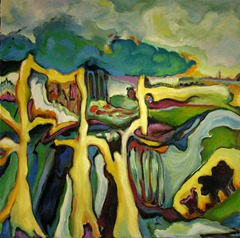 “This is the sixth year we have collaborated on an exhibition with fellow artists in Nahariya. The plan begins when committee members and colleagues in both New Jersey and Israel engage in a conference call to discuss ideas and then decide on a theme together,” states Fred Spinowitz, artist and delegate to Nahariya 2010. “The artists then set to work and do their magic. One striking observation every year, when the show comes together, is how artists living 5,000 miles apart can create such beautiful images that share so many similarities. The artists speak through their work and the exhibitions always spark fascinating conversations between the viewers and the artists themselves. It is such a meaningful way for Americans and Israelis to connect and share important ideas through art.”
(Above: Rachel Unter, Roots)

This exhibition is one aspect of the Partnership2gether professional exchange that was established by JFNNJ to strengthen ties between the United States and Israel and promote Jewish unity and identity. A “people-to-people” living-bridge has resulted over the years.

“The artists have been building bonds based on common ideals and beliefs and the exhibits have become an important and worthy way for Israel and America to express their kindred spirits,” adds Sheryl Intrator Urman, who serves as the Art Exchange Program Chair and curator of Juried show. “An exchange program for artists was established and after I was awarded the first Art Residency, I thought it would be great to set up an annual art contest and exhibition to solidify an ongoing bond. For the next three years, American artists selected in a juried contest would be awarded with residency in Nahariya, and those chosen in Nahariya would come to New Jersey. This early bond allowed artists in both countries to meet, establish professional bonds and form personal friendships. This is a key goal for the partnership and it is working in so many rewarding ways.”

The show will feature the works of four artists awarded for “Outstanding Artistic Achievement” as well as past winners. The winners for this year’s Saving Fruit Trees exhibit are: Gila Bretter - The Golden Tree;

Mindy Schultz - “All Fruit Trees, Especially the Shiv'at Ha Minim"; Deborah Kmetz - "Apple" and Rachel Unter - "Roots." There is also a local dedicated committee that works directly with a committee in Nahariya. The Northern New Jersey Committee includes:  Adele Grodstein, Doryne Davis, Fred Spinowitz, and Danielle Kaplan. The Jury always involves the expertise of Anita Duquette from the Whitney Museum, who guides the jury panel on selection of art.

"The Partnership2Gether initiative represents northern NJ's special relationship with Nahariya, a seaside community in the north of Israel,” says Susan Penn, Chair of the Partnership2Gether initiative and board member of JFNNJ.  “We are inspired by our delegations of artists, teen leaders, educators, physicians, female business owners, and first responders, who have made personal connections over the years, particularly artists who form bonds and speak through the common language of their art.”

“The JCC has a long and impressive history working with Israel’s community centers and has been active in the Nahariya partnership since its inception to serve as part of an ongoing and exciting avenue for building new and meaningful connections with Israel,” says Kaplen JCC on the Palisades CEO Jordan Shenker. “We are proud to be hosting this exhibition as a way to help advance cultural life in northern Galilee and to support Federation in their mission.”