STAGED READING OF AWARD-WINNING PLAY IN CLINTON THIS SATURDAY 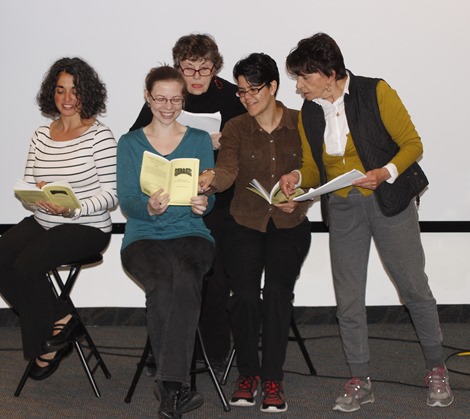 Told in two acts and 45 phone calls, BELLES, is the winner of the Margo Jones Playwriting Awards Competition. The play, told with humor and pathos, visits six Southern sisters, who, over the course of an autumn weekend, seek to bridge the physical and emotional distance between them via the telephone, and in the process come to terms with their shattered family history. (Top L-R: Gina Sampaio, Erin Baehr, Marlene Cocchiola, Michelle Greco, and Merry La Rue. Missing: Ethan Anidjar, Gwynn Press Anidjar, and Noel Krommenhoek. Photo by Kent Loudon)

Funding for this event has been made possible in part by the NJ State Council on the Arts, a Partner Agency of the National Endowment of the Arts, through the Hunterdon County Cultural & Heritage Commission. BELLES is being produced by special arrangement with Samuel French, Inc.