REVIEW: CHATHAM PLAYERS’ POLISHED PRODUCTION OF “SPAMALOT” LOOKS ON THE BRIGHT SIDE OF LIFE 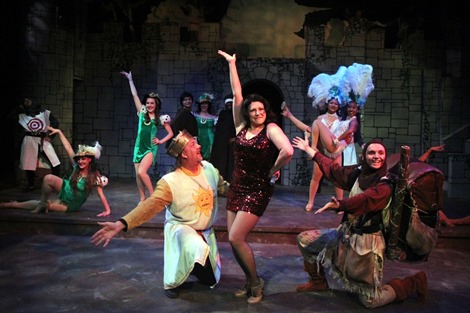 It's raucous. It's raunchy. It's irreverent. It's sacrilegious. It’s politically incorrect. It's snide. It's snarky. It's profane. It's Spamalot—a musical "lovingly ripped off from the motion picture, Monty Python and the Holy Grail”—in a splendidly funny and polished production shaking the rafters of the little Chatham Playhouse, where it will run weekends through May 21. It's an experience you won't want to miss. (Above: Mark Smith, Robin Horn, Joseph Laurino and the ensemble)

Performed by a cast that doubles, triples and even quadruples for a large roster of characters, the play spoofs the Middle Ages, and pokes great fun and takes wide liberties with the age-old legend of King Arthur and the knights of his Round Table tasked with finding the Holy Grail, the cup from which Jesus drank at the Last Supper. Along the way, the playwright and composer manage to create a Broadway musical about the conventions of a Broadway musical, especially the kinds of songs that pop up in almost every show. Two, "The Song That Goes Like This" (it's reprised three times in three different versions) and "The Diva's Lament," do nothing to really advance the show except send-up the stock numbers about a boy and a girl or the actress who feels neglected because she hasn't appeared onstage for a while. Corny jokes, balmy characters, politically incorrect japes and singular silliness have all been translated from the screen to the stage to the accompaniment of music composed by Idle and John du Prez and lyrics penned by Idle.

Add a pompous historian to introduce each act with some (not always factual) historical background, a group of maidens attired as cheerleaders for the Lady of the Lake, a gay prince rescued from a tower by Sir Lancelot, a conflation of Camelot and Las Vegas, and a song that has become an anthem for the optimists of the world, exhorting us to "Always Look on the Bright Side of Life" (not a bad piece of advice in the current torrid political climate). (Above L-R: Knights of the Roundtable, Joseph Laurino, Mark Smith, Howard Fischer, Mike Patierno, Peter Horn and Chip Prestera)

Bob Lukasik and Roy Pancirov have designed a set dominated by castle walls, Richard Hennessy's lighting and Joe DeVico's sound give the production a real professional edge. On this canvas, director James Mosser keeps the mayhem running smoothly and prevents the large cast from bumping into one another as they enter and exit the playing space, all while he elicits terrific performances from the cast, some of whom are making their Chatham Playhouse debuts. And kudos go to Cheryl Galante and Christina Kirk for their snazzy costumes and to Jennifer Williams for the spiffy and varying choreography performed by an ensemble of youngsters with energy and skill.

The cast is to be commended as well. Newcomer Mark Smith (right, with Joseph Laurino) is very funny as a regal, yet dim, King Arthur, out to enlist knights for his revolutionary Round Table and attempts to marshal his rag-tag bunch of knights in their search for the Grail. As Patsy, his very intelligent yet underappreciated squire, Joseph Laurino (also making his CCP debut) runs circles (sometimes literally) around his master—and almost everyone else on stage! He gets to clap two coconut shells together as he and Arthur "ride" their horses across Britain. Chip Prestera gets to parade his substantial comedic chops as Sir Robin, the cowardly knight, who poops his pants in battle. Able support is provided by Mike Patierno as a doofus Sir Galahad and Howard Fischer as the flatulent Sir Bedivere. And Gus Ibranyi brings down the house as the Historian and a character called Not Dead Fred, who refuses to get on the cart taking the plague victims away, and ending with the feminine Prince Herbert, who would rather sing than wed the princess his father has selected! Peter Horn is terrific as Launcelot, who discovers his sexuality with Prince Herbert and who doubles as the French Taunter ("I fart in your general direction") who hurls insults at the Brits from his castle tower.

Last, but not least are consummate performers Mike Patierno and Robyn Horn (left) who portray Sir Galahad and the Lady of the Lake/Leading Lady Diva, respectively. Both command the stage whenever they appear, he with a hilarious long, curly wig and a conceited air as befits the best knight in the realm, and who discovers his sexuality in a hilarious number with a "maiden" he's come to save. Wearing a series of slinky, revealing dresses perfect for the diva delivering a couple of show-stopping tunes, Robyn Horn is a real find for community theater, an actor with a terrific set of pipes whose timbre that really raises the playhouse roof! She has a grand time singing skat, a torch song and "The Diva's Lament," effortlessly mixing various musical styles in the same song. And her comedic timing is impeccable.

Not to provide any spoilers, be prepared for a mishmash of musical and dancing styles, performed with a wacky set of props assembled by Kate Pierce and Trish Lum. They are so unexpected and crazy that you will split your sides laughing at their incongruity with the tale introduced into British literature by Sir Thomas Malory way back in the 15th century! Very Monty Python, to be sure!

Opening night of Spamalot was sold-out, so I suggest that you call the box office or visit the website to order tickets for you, your family, your friends—even your enemies! I guarantee peace between you and the latter once you have shared the experience of this accomplished perfection now onstage in Chatham. Best of all, parking is free, you will pay no tolls and there are several reasonable (and tasty) restaurants in town to visit before the 8 PM curtain!

Spamalot will be performed Fridays and Saturdays at 8 PM and Sundays at 2 PM through May 21. For tickets and information, call 973.635.7363 visit www.chathamplayers.org online. The Chatham Playhouse is located at 23 N. Passaic Avenue in downtown Chatham.