In what has become a Mother’s Day tradition, the Alvin Ailey American Dance Theater concluded its weekend-long visit to NJPAC in Newark with a performance that was nothing short of glorious. Since 1998, the company, one of the world’s most celebrated, has attracted a crowd to Prudential Hall, the Sunday matinee being The Place To Be on Mother’s Day. 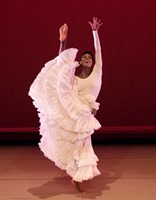 We choose to begin our look at this dazzling display of American dance at its best with the piece that came second on the program: Cry, a 16-minute solo performed on Sunday by Akua Noni Parker. It makes sense to begin with Cry because it was choreographed in 1971 by Alvin Ailey as a birthday gift for his mother, Lula Cooper. The original dancer was Judith Jamison, the company’s Artistic Director Emeritus, who has since taught the piece to generations of Ailey dancers who followed her.

Garbed in a white leotard and flounced full skirt, Parker (above, righth) executed movements dramatic and expressive while at the same time displaying the athleticism inherent in all of Ailey’s choreography. With music by Alice Coltrane, Laura Nyro and the Voices of East Harlem, she proceeded through a kinetic narrative honoring all those who came before. Her movement acknowledged their pain, their loss, their endurance and finally their triumph. The piece is dedicated to “all black women everywhere—especially our mothers.”

The program had opened with Ailey’s classic, Night Creatures, a 1974 ensemble work, with music from Duke Ellington. With the women dressed in beautiful costumes by Jane Greenwood, evoking glamorous evening gowns, the piece combines the balletic geometry typical of Ailey’s choreography with elements of ballroom and jazz. Danced before a backdrop calling to mind a starry night sky, it is a glamorous, romantic sojourn for seven couples, led beautifully on Sunday by Hope Boykin and Vernard J. Gilmore.

New to Ailey this season, having premiered in New York in December, was Open Door, choreographed by Ronald K. Brown to an irresistible score by Arturo O’Farrill and the Afro-Latin Jazz Orchestra. The piece, the sixth created for the Ailey company by Brown (who has his own critically-acclaimed company, Evidence) it comes at a key historic moment, reflecting the reopening of relations between the United States and Cuba.

As they express the beat of the music, the five couples are exciting and energetic, their movement based on mambo and Afro-Caribbean jazz. The women’s full skirts (perhaps with a nod to Jerome Robbins’ America number from West Side Story) are used to add to the shape of their motion. The contrast between Brown’s jazz aesthetic and Ailey’s, which is more grounded in ballet, is impossible to miss, pointing to the amazing versatility of the troupe. These are dancers who apparently can do anything. 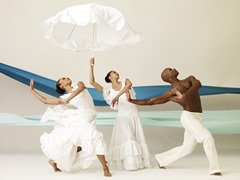 The program ended with the Ailey piece that is arguably the greatest choreographic work in American dance (with apologies to George Balanchine and Agnes DeMille): Revelations. First performed in 1960, it was inspired by the role the church and the gospel tradition played in the choreographer’s youth. It was danced by the company, with numerous solos throughout, to a score from spirituals and gospel music.

Opening with a group using their arms to create an image that resembles a bird opening its wings, it progresses from image to unforgettable image, ending with “Rocka My Soul in the Bosom of Abraham.” By this time, the audience, as always, was on its feet, clapping out the rhythm, unwilling to see it end. It was a glorious performance.

A sad one as well, as two exceptional dancers, Demetia Hopkins-Greene and Marcus Jarrell-Willis, made their final appearances with the company. We wish them all the best.