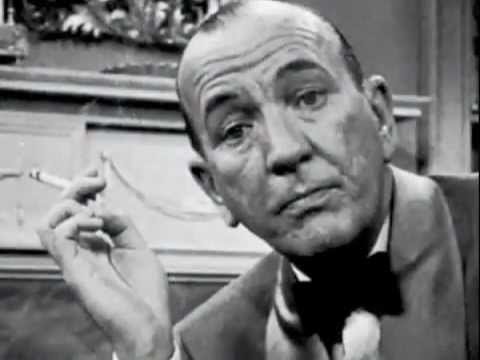 With a career spanning six decades, novelist, poet, composer, librettist, playwright and actor Noël Coward dominated the British cultural scene. Indeed, given his proficiency in such a wide range of genres, no one before or after him has even come close to his influence and fame. Yet, despite his success and pride in his accomplishments, there was one thing Coward could never publically own up to: his homosexuality. At the height of his fame, being gay in Great Britain was a crime, carrying a punishment of prison and a social stigma that could ruin a professional reputation. And although Coward's homosexuality was hinted at during his lifetime, it was only brought out in the open after his death in 1973.

That doesn't mean that Coward didn't write (and perform) roles for gay-ish characters in his comedies of manners. But it isn't until his final play, A Song at Twilight, that he figuratively "outs" himself in the role of Hugo Latymer, a character who resembles Coward, a famously cultured proponent of good manners who finds himself facing an extortionist who threatens to reveal "the love that dares not speak its name."

All this may seem quaint in this current era of acceptance of homosexuals and legislation mandating their equal rights and gender equality, but news from North Carolina and other states reminds us that a sea change in attitudes does not happen overnight—or even in a few years. Presciently, when selecting A Song at Twilight to inaugurate their 54th season, The Shakespeare Theatre of New Jersey touched a nerve with a subject still resonating a half century since the play was first produced. That this very talented troupe—one of the theatrical treasures of the Garden State—has done so in a polished, elegant, bittersweet and very human production provides not only laughter but food for thought after the stage lights have come down. 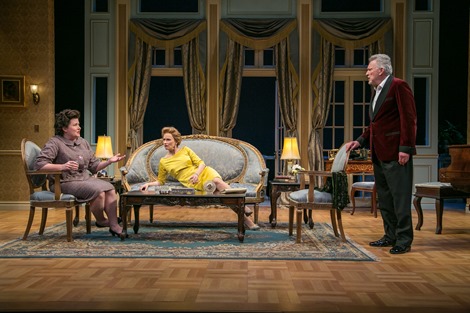 Aging celebrated writer Hugo Latymer, he of the "honest," often cruel and insulting judgments of other people, finds his orderly and highly regulated world turn upside down when old flame Carlotta Gray visits his Swiss hotel suite. What can she want, he wonders with some trepidation? Why is she reaching out to him after many years of silence? His staid Teutonic wife Hilde is so confident of her husband that she abandons the two former lovers for a lunch with her lesbian friend (of whom Hugo roundly disapproves). What ensues between Hugo and Carlotta involves blackmail, revenge and emotional fireworks, conducted with Coward's usual wit and clever dialogue, all of which lead to a rather unexpected, albeit satisfactory, dénouement. (Above L-R: Alison Weller, Laila Robins and Edmond Genest) 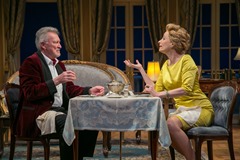 The production team Artistic Director Bonnie J. Monte has assembled to pull off this remarkable feat is nothing short of splendid. Director Paul Mullins shows his versatility with all genres of drama as he fluidly moves the actors through the plot while letting their humanity shine through the rather cruel humor. In the role of Hugo Latymer, veteran Edmond Genest (above, with Laila Robins) aptly conveys the man's pomposity and insufferable nastiness toward his wife and former mistress, both of whom manage to get back their own, in spades. He's a stuffy boor, forever championing good manners and moral rectitude, all while hiding his own dark secret. He maintains this pose until the final scene, when he reveals a man with feelings he's tried to repress. 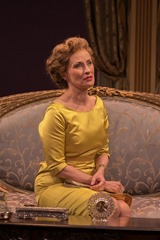 His nemesis, Carlotta Gray, is played by the wonderful Laila Robins with brittle irritation and snarkiness. She matches Hugo's cruelty insult for insult, turning the tables on him so that, contrary to the first act, she has the upper hand for most of the second. Although younger in real life than Carlotta, Robins looks like an aging actress who's undergone cosmetic "enhancement," but she seems to have come a long way since the 19-year-old virgin seduced and later educated by a much older Hugo. Irritated by his hypocrisy and nastiness, she has come hell-bent for revenge. As portrayed by Robins, she is a formidable opponent for the supposedly great man. 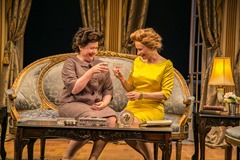 But the real "heroine" of the play is the stolid, dowdy, very loyal Hilde, portrayed as a woman of feelings by Alison Weller (right, with Robins). Cruelly insulted by her husband, Weller's Hilde responds by letting him know that it is not okay for him to treat her so shabbily, but it is not until the penultimate scene that the actress reveals Hilde's true sense of character—indeed, her sense of morality—when she lays out her relationship with Hugo and reveals how much she knows of her husband's secret, thus detoxifying Carlotta's threat to open the closet door and "out" him. We want to applaud her loyalty and confidence in the face of possible chaos! 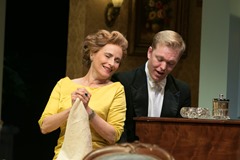 And finally, in the small role of Felix, the hotel employee who brings dinner and drinks to Hugo's suite, Ben Houghton (left, with Robins) breaks the tension without drawing undue attention to himself. He's suave and smooth and possesses a terrific singing voice, especially when warbling a tune written by Coward himself, "If Love Were All," providing a bittersweet touch to the comedic nastiness unfolding when he's not onstage.

Once again, STNJ's production values are top-notch. Brittany Vasta's elegant set is the perfect canvas upon which Coward’s comedy of manners unfolds; Michael Giannitti's lighting design is appropriate for a play in which long-hidden secrets are about to be revealed. And Nikki Delhomme's costumes telegraph the characters' personalities and personas: velvet smoking jacket and patent leather slippers for Hugo, a form-fitting yellow satin dress and sparkly stilettos for Carlotta, a rather dull brown tweed jacket dress and ugly hat for Hilde, and formal attire for Felix. Meg Murphy's women's wigs, while somewhat ugly, feel appropriate to the period and characters' status.

Of the three main characters in A Song at Twilight, two are thoroughly disagreeable and the third, Hilde, doesn't really come into her own until the play is almost over. What keeps us enthralled is the battle between Hugo and Carlotta, the clever yet sharp insults each delivers, and a desire to know how the skirmish (or, more appropriately, ambush) will end.

For that is the genius of Noël Coward: In this, his swan song to the theater, he tackles a weighty, personal subject and moves past his usual brittle observations of the ways people relate to one another to give us a trio of characters—each with a poignant back story—that we actually care about. And as lovingly and beautifully presented by The Shakespeare Theatre of New Jersey, it is a fitting way to open their 54th season on the campus of Drew University in Madison.

A Song at Twilight will be performed at the F.M. Kirby Shakespeare Theatre, 36 Madison Avenue, in Madison through May 29. For performance times, information and tickets, call the box office at 973.408.5600 or visit www.ShakespeareNJ.org online.