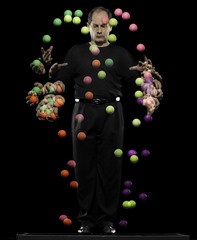 Michael Moschen is considered to be one of the greatest jugglers of all time and among the most visionary of performing artists. He has transformed an ancient art into a mesmerizing experience, having garnered recognition by the MacArthur Foundation, which awarded him its prestigious Genius Award.

When David Bowie and Jim Henson were working on the cult hit film “Labyrinth,” they turned to Michael Moschen to perform the mind-boggling crystal ball tricks employed by Jareth, the Goblin King.

But such work is part of the mystique of this remarkable talent. He was commissioned by Cirque du Soleil to create and stage a work for their permanent theatrical circus in Las Vegas and is much in demand as a performer around the world. His television appearances range from the Great Performances Series on PBS to Sesame Street and include An Evening at the Pops, The Tonight Show and Late Night with David Letterman.

Deeply involved in understanding and sharing the physics and mathematical principles that underlie his work, he currently is a sought-after speaker at conferences, universities and corporations.

The speaker series will conclude on Monday, April 4, 6:30 p.m. at the  IMAX Theatre at Liberty Science Center in Jersey City ($25) with planetary scientist Dr. Carolyn Porco, who is the leader of the imaging science team on the Cassini mission presently in orbit around Saturn and an imaging scientist on the New Horizons mission which reached Pluto last July and is continuing deep into the Kuiper Belt.

Reservations are required for all lectures. For more information, call 201-200-3196 or visit www.njcu.edu/lectures.