Audiences at Merseles Studios in Jersey City will experience an eclectic, thought-provoking selection of theater, dance and readings as Jersey City Theater Center (JCTC) continues its exploration of Identity, which closes May 13th.

Identity – the new series by JCTC – looks at the many ways individuals define themselves and each other – and how our definitions of self are affected by the world we live in, and in turn, influences both our culture and our community. Through theater, performances, readings, dance and a visual arts exhibition – and Talk-Back sessions featured as part of most events – JCTC takes audiences on a multi-faceted journey of inquiry about the meaning of self and its relationship to society. Identity – which was funded in part by a grant from the Hudson County Department of Cultural Affairs.

Hoaxocaust!, written and performed by Barry Levey with the generous assistance of the Institute for Political and International Studies, Tehran

Performance followed by Talk-Back with Levey 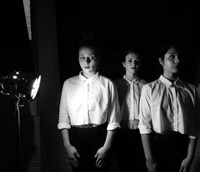