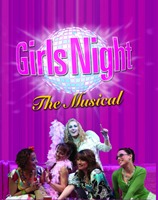 The Union County Performing Arts Center invites women to share the fun and laughter at a hilarious, feel-good comedy.

Girls Night: The Musical has been thrilling audiences and earning raves from critics throughout North America since it began touring after its sensational Off-Broadway debut. This touching and hilarious "tell-it-like-it-is" musical takes audiences on a journey into the lives of a group of five female friends who re-live their past, celebrate their present and look to the future on a wild and hilarious karaoke night out - and you'll recognize a bit of yourselves in every one of them. Audience members can't help but laugh, cry and even find themselves singing and dancing in the aisles as some of the most popular hit songs of the '80s and '90s make this musical a fan favorite.

Girls Night is bursting with energy and is packed with the hits "Lady Marmalade," "It's Raining Men," "Man I Feel Like a Woman," "I Will Survive," "We are Family" and many more. "Mix a bit of Desperate Housewives with Sex and the City and Mamma Mia and you've got the hit, Girls Night: The Musical!'" says Las Vegas Round the Clock. This show is made possible in part by generous sponsorship from L'Oreal USA.

So get your girlfriends together and come sing along, dance along and sip on cocktails as you take in this party of a show.