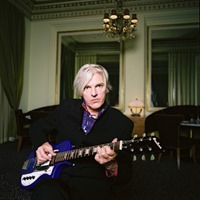 Robyn Hitchcock (Robyn Hitchcock and The Egyptians) broke into the Neo-psychedelia Rock scene when his band, The Soft Boys, released their first album, A Can of Bees, in 1979. Since then, Robyn has released more than twenty albums.  He is one of England’s most enduring contemporary singer-songwriters and live performers. A surrealist poet, talented guitarist, cult artist and musician’s musician, Robyn Hitchcock is among alternative rock’s father figures and is the closest thing the genre has to a Bob Dylan, who is, coincidentally, his biggest musical inspiration.

After the members of The Soft Boys parted ways, Robyn went on to solo work, which resulted in his well-received album, I often dream of Trains released in 1984. He then shifted his focus, and formed the band Robyn Hitchcock and The Egyptians where he rocketed to success. The albums The Elements of Light (1986), Globe of Frogs (1988), and Queen of Elvis (1989) were all released to critical success.

Robyn Hitchcock describes his songs as “paintings you can listen to.” His most recent album The Man Upstairs (2014) is a bittersweet love letter to a vanishing world. Produced by legendary folk-rock Svengali Joe Boyd (Pink Floyd, Nick Drake) the album was critically acclaimed by Mojo, Uncut, and The Quietus.

SOPAC programs are made possible in part by the New Jersey State Council on the Arts.

About SOPAC
Since 2006, SOPAC has been serving as a premier performing arts center in the region. SOPAC offers innovative artistic and cultural experiences for diverse audiences in an intimate, inviting environment. The premier arts center hosts a variety of live performances, community events and education programs for all ages.  To further expand its offerings, SOPAC has a partnership with the Juilliard School of Music to present Juilliard @ SOPAC—a series featuring upcoming musicians from the acclaimed conservatory.  SOPAC is home for Seton Hall University Arts Council’s performances, including Classical Concert Series, Jazz N’ the Hall performances and Seton Hall Theatre productions.  SOPAC also presents performances by its theater company in residence, Midtown Direct Rep, and its dance company in residence, Lydia Johnson Dance.  For more information, visit www.SOPACnow.org.