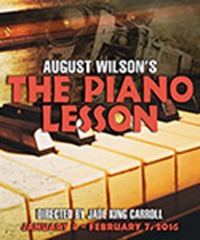 WHEN: Jan. 8 – Feb. 7
WHERE: McCarter Theatre’s Berlind Stage, 91 University Pl., Princeton
Tickets are available now at the McCarter Box Office or online at www.mccarter.org or by phone at 609-258-2787.

A struggle between a family’s enduring legacy and its chance for a brighter future takes center stage in The Piano Lesson: one of the most critically-acclaimed productions in August Wilson’s landmark ten-play American Century Cycle.

Winner of the 1990 Pulitzer Prize for Drama and Drama Desk Award for Outstanding New  Play, August Wilson’s The Piano Lesson is set in 1930s Pittsburgh, revolving around the Charles family and the fate of an ancient piano covered in carvings telling the story of their ancestors. To reclaim his family’s legacy, Boy Willie (Marcus Callender) wishes to sell their priceless heirloom, but will his sister Berniece (Miriam A. Hyman) and the ghosts of their past stand in his way? An intense tale of a family at a crossroads, August Wilson’s The Piano Lesson speaks deeply to the themes of memory, hope, and perserverance.

About Jade King Carroll’s directorial debut, McCarter Theatre Center Artistic Director Emily Mann said: “Jade is an extraordinary talent who assisted Ruben Santiago Hudson on August Wilson’s Gem of the Ocean at McCarter over 10 years ago. During her time here, Jade distinguished herself as a remarkable artist, and she went on to launch a vibrant career. One of her early triumphs, a production of Raisin in the Sun at Julliard, made a lasting impression on me, and is the best production of that play I have ever seen. She is known as an astute and sensitive director who elicits extraordinary performances from her actors. It is with great pride and excitement that I introduce you to her work.”

About McCarter Theatre Center
Under the leadership of Artistic Director Emily Mann and Managing Director Timothy J. Shields, McCarter Theatre Center is recognized as one of the nation’s premier theater companies. Renowned for major contributions to the theatrical canon, McCarter premieres include Christopher Durang’s Vanya and Sonia and Masha and Spike (winner of the 2013 Tony Award® for Best Play) and Miss Witherspoon (both commissions); Tarell Alvin