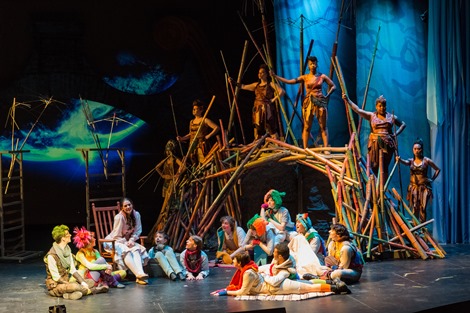 With construction now complete on their state-of-the-art scene shop and several new design/technology classrooms, the Kean University Department of Theatre has announced an ambitious season for the coming academic year. (Above: The Kean Department of Theatre presented Peter Pan earlier this year. Photo by Ben Gancsos.)

“This year the Department of Theatre celebrates the opening of our new scenic construction facility, where students' exposure to all of the behind-the-scenes components will be enhanced,” stated longtime faculty member and department spokeswoman Holly Logue. “Having been recognized as one of the top ten most underrated college theatre programs in the northeast by OnstageBlog.com, we hope to continue to raise awareness of all the good things that are happening at Kean. We also celebrate our ongoing partnership with Premiere Stages, the professional theatre on campus, by producing one of [artistic director] John J. Wooten's plays, the contemporary farce, Kiss the Bride.”

A tragedy first performed in the ancient city of Athens, Elektra charts an escalation of unreasoning hatred that erupts into matricidal frenzy.

Years before the action begins, a father sacrificed his eldest daughter so that the gods would allow the winds to blow and carry him and his fleet to the Trojan War. When he returned victorious, his wife, in revenge for her daughter's murder, slaughtered him with an axe. As queen, she took a lover and ruled in his stead. A young son was smuggled away; another daughter remained to mourn her father and nurture a festering hatred for her mother.  The story of Elektra begins when the son, now grown, returns and joins with his sister to plot the assassination of the woman who gave them birth. Director E. Teresa Choate has opted to use a translation and adaptation by Ezra Pound and Rudd Fleming for the production.

“During another war, millennia later, a famous and infamous American poet, Ezra Pound, was possessed of an unreasoning hatred for his homeland,” said Ms. Choate, who most recently directed The Importance of Being Earnest for the University. “Arrested in 1945 on charges of treason for making anti-American broadcasts during World War II, [Pound] was incarcerated in a psychiatric hospital for the criminally insane in Washington, D.C.  During his imprisonment, the mad American poet forged an alliance with this mad daughter of ancient Greece. Surrounded by the sights and sounds of the asylum, he translated the Greek of Sophocles’ poetic tale of murderous madness into English that resonates with 1940s America and the genius of Pound’s poetic gift.”

CHILDREN OF EDEN
by Broadway legends Stephen Schwartz (Godspell, Wicked) and John Caird (Les Miserables, Candide). Based on a concept by Charles Lisanby

A joyous and inspirational musical about parents, children and faith , Children of Eden will feature direction by Holly Logue, musical direction by Meg Zervoulis, and choreography by Michele Mossay. Drawing on the Old Testament as its primary source material, this enchanting musical retells the human story from the moment of Creation until just after the Flood, bringing vibrant new life to our shared ancient history.

“Children of Eden causes us to ask important questions about family, love, and social responsibility as it sweeps us along on a tide of music and lyric,” stated director Holly Logue.  “The show challenges us as it reaffirms our beliefs.  It validates our own daily struggles, comforts us as we try to make sense of sadness, and sustains us as we seek the light that illuminates each of our lives.  The show ultimately delivers a bittersweet but inspiring message: that the hardest part of love is letting go."

The Department will hold an open call for children ages 9-12 for the roles of young Cain and Abel in the production. Auditions will take place Saturday, September 12 at 11 a.m. in Vaughn Eames Hall, Room 212.  Children interested in auditioning should prepare one verse of any Broadway song. To schedule an audition appointment, please call 908-737-4420.

Julius Caesar, a celebrated military leader, has just been publicly announced as a permanent dictator with absolute political control. As with all granted political power, envy quickly ensues.

“[Julius Caesar] tells the story of the conspiracy to murder Caesar and the power struggle that follows after his death,” explained director Ernest Wiggins.  “It also asks us to examine such themes as friendship, power, gender, manipulation, and love.  Join our Company as we explore this powerful and provocative play and attempt to not only understand Roman politics, but the politics of our day.”

In this madcap comedy, a groom schemes to murder his frequently married and very wealthy bride on their wedding night. Having hired a couple of bumbling bad guys to do the job, the groom mistakes an introverted wedding guest for the hired killer, sending him upstairs with his wife. Soon after, the real hit man arrives, having kidnapped an unsuspecting bride at the wrong reception. The kidnapped bride soon escapes from the trunk of their car and, with the help of crazed couples and uninvited guests, sends the newlyweds fleeing and the audience rolling down the aisle with laughter.

TICKETS: Standard tickets to all Department of Theatre performances are $15, with $12 tickets available for Kean faculty, staff, and alumni, and $10 tickets available for students.
To purchase tickets or request a season brochure, please call the Kean Stage box office at 908-737-SHOW (7469), email ticket@kean.edu, or visit www.keanstage.com.

Accredited by the National Association of Schools of Theatre, Kean University's Department of Theatre mirrors the university's mission to provide a core educational foundation based on the liberal arts. Our curricula are designed to educate theatre students to enter the realm of professional theatre, theatre education or advanced graduate studies. For more information, please call (908) 737-4420, email theatre@kean.edu, or visit www.kean.edu.