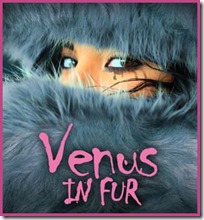 In the 10+ years I have been reviewing them, I have come to believe that Alliance Repertory Theatre is the Best Little Theater Company You've Never Heard Of. Not only does Artistic Director Michael Driscoll have a knack for selecting little-known plays but, despite changing locations several times in the past few years and minus fancy sets, their productions are polished, professional and provocative—all at once.

The company's most recent production, David Ives' 2012 Tony Award-nominated play Venus in Fur, is no exception. Under David Christopher's crisp, firm direction, this sexy comedy evokes laughter while managing to unsettle the audience with its shape-shifting characters, simple yet convoluted plot, and the questions it raises about truth, reliability, degradation and domination.

Tough writer-director Thomas Novachek finds himself disheartened after a fruitless day of auditions for his new play, an adaptation of an 1870 novel Venus in Furs by Austrian author Leopold von Sacher-Masoch (that happens to have inspired the term masochism). With an ominous clap of thunder, loud, clumsy Vanda Jordan barges into the dingy audition hall just as he is preparing to go home and insists that he permit her to read for the role. As they perform the script, this vulgar, unschooled actress miraculously "becomes" a sexy, dominating character. With both Tom and Vanda caught up in the characters they are reading, the balance of power shifts as the actress establishes total dominance over the director.

Jeff Ronan (above and right) and Christy Richardson (right and below) perform a spellbinding pas de deux that sizzles sexily. Ronan's Tom is rather snobbishly proprietary about the characters he has created. How can this seemingly clueless girl with a thick New York accent and who has merely glanced through the script as she rode the subway possibly be "right" for the seductress he's envisioned? Her complete lack of knowledge about the theater is astounding, yet when she begins to read, she is transformed. Ronan's Tom, too, gradually sheds his prickly writer/director persona, assumes a posture and adopts an accent appropriate to "become" the noble Severin von Kusiemski. His transformation from aristocrat to slave (in his own play and Ives') is both convincing and compelling.

As Vanda (she ironically shares the name of the novel/play's heroine), Richardson is perfect as the loud, potty-mouthed ditz and the dulcet-toned aristocrat who dominates Tom's play. She manages this sleight of hand by adjusting her posture, accent and pronunciation, and changing costumes in a wink (she seems to have an entire collection related to the play in her oversized bag). She remains in character—whichever one she is playing at the moment—yet we never really know just who she is. Is she a feminist (with a capital F), complaining that women are always degraded and blamed for whatever goes wrong, has she been hired by Tom's fiancé to test his fidelity, or is she merely an aspiring actress who has been given a chance to retaliate against heartless directors who have failed to cast her in the past? Whichever it is, Richardson's Vanda is duplicitous, wily, the incarnation of righteous indignation, a dominatrix, an innocent, a con woman—a real shape shifter.

Venus in Fur is a tour-de-force—of writing, directing and acting. Nina Arianda won the 2012 Tony Award for Best Actress in a Play, which also received a nomination for Best Play. Alliance Rep's production is equally compelling, and given the small size of theater on the lower level of Mondo in Summit (only 35 seats), the action feels less like a play we are watching and more like action we in which we are participating. For 90 intermissionless minutes, you will be mesmerized, and I guarantee that you will talk about this production (and the play) for days afterward. With its clever dialogue and superb acting, Alliance Rep's production of Venus in Fur is one you should not miss!

Venus in Fur will be performed at Mondo, 426 Springfield Avenue, Summit's lower level through July 25. Performances are Friday and Saturday at 8 PM; Sunday, July 19, at 7 PM. For information and tickets, call 908.472.1502 or visit www.alliancerepertory.ticketleap.com/venus-in-fur. The play is recommended for ages 16 and above. The theater has just 35 seats, so do order early.