While lately we've heard talk of political dynasties (the Bushes and Clintons), America was once known for its theatrical dynasties. In the 19th century, there were the Booths (Junius Brutus Booth and his two sons Edwin and Lincoln's assassin John Wilkes), and the 20th century stage was graced by the husband-wife duo of Alfred Lunt and Lynn Fontanne, to name two.

But perhaps the most colorful and notorious of all were the Barrymores—siblings Ethel, Lionel and John—whose scandalous scrapes and devotion (some would call it an obsession) to the stage served as the inspiration for Edna Ferber and George S. Kaufman's wildly wicked comedy The Royal Family, now inaugurating The Shakespeare Theatre of New Jersey's 53rd season and Bonnie J. Monte's silver anniversary as the company's Artistic Director. 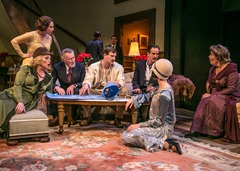 As parodied by Ferber and Kaufman, what a crew the Cavendish clan are! Ever squabbling, engaging in rapid-fire repartee, they reveal themselves to be Olympic-class narcissists of the first order. Matriarch Fanny Cavendish rules this theatrical family, which includes her brother, the less successful actor Herbert Dean and his wife Kitty; Broadway diva daughter Julie and her up-and-coming ingénue daughter Gwen; and son Tony, a talented actor gone "Hollywood" and whose scandalous scrapes cause a whole lot of trouble for everyone in the family. For a group that eats, drinks and sleeps performance, the arrival of two nonactors offering marriage proposals to Gwen and Julie provides the crux of the conflict upon which drama depends: Should the two women wed these outsiders for the promise of money, security and a settled life, or is the pull of the stage too great to give up? [Above (L-R): Kitty Dean (Allison Mackie), Julie Cavendish (Roxanna Hope), Oscar Wolfe (Edmond Genest), Herbert Dean (Matt Sullivan), Gwen Cavendish (Samantha Bruce), and Fanny Cavendish (Elizabeth Shepherd) listen as Tony Cavendish (Benjamin Sterling) tells tales about his work abroad. (L-R, back): Gil Marshall (Patrick Boll) and Perry Stewart (Tug Rice) Photo © Jerry Dalia, The Shakespeare Theatre of New Jersey.]

Over the course of three acts, director Bonnie J. Monte stylishly guides the mayhem through its convoluted way to denouement. And it sure helps that she has a very talented cast to pull off this snappy performance of a play written in 1927 about a clan most of us have only heard of through the celebrity of John Barrymore Jr.'s daughter Drew.

The events unfold on a lavish set designed by Charles Murdock Lucas that sports a dramatic curving staircase and a crystal chandelier. People run up and down the stairs, in and out of doors, and plop down on elegant sofas and chairs. The two levels provide the perfect backdrop for emoting, which these celebrities do whenever they get the chance, especially when agonizing over the dilemma of balancing family life with their artistic calling. And

As imperious matriarch Fanny Cavendish, Elizabeth Shepherd (right) is every inch the star, from her throaty voice to her reminiscences of her life with late husband Aubrey, who died just two minutes after taking his fourth curtain call! Evidently, Fanny managed to meld family and career very well, something her children don't seem to be able to do. But when you come down to it, for Fanny, "acting is everything" and "marriage is not a career; it is an incident." Shepherd is perfect as the star who cannot give up the lure of the stage, despite old age and failing health.

Her daughter Julie is played by Roxanna Hope (below left) as a reigning Broadway star who juggles motherhood and a marriage proposal from a very wealthy man. Hope is delicious, especially when having a meltdown; obviously, her character manages better on a stage than dealing with real-life calamities! Too, Hope is excellent at performing the physical comedy so prominent in the script. As her profligate sibling Tony, Benjamin Sterling is both dashing and delusional. On the lam from some new scrape he got himself into in Hollywood (it involves murder and a breach of promise), he's desperate to get on a ship to Europe. Clueless as to what is needed to pull off such a feat, he just assumes that getting a passport and packing can be accomplished at the snap of a finger. He has a very funny bit dueling with Julie's boxing trainer (above); once again, Rick Sordelet has designed a swordfight that involves a great deal of athleticism, which Sterling performs with great energy and style. 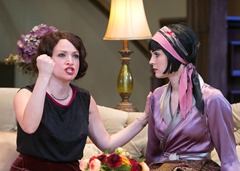 As Gwen, Julie's 18-year-old actress-in-training daughter, Samantha Price (right, with Roxanna Hope), complete with a Louise Brooks' hairdo and adolescent high spirits, does a fine job in her Shakespeare Theatre debut. Matt Sullivan plays Fanny's decidedly less-talented brother Herbert Dean with great enthusiasm (and hopes) for a hit play; Allison Mackie's portrayal of his wife Kitty is an outsider, both in the family and, one gets the idea, in the profession. She has stiff competition for audience attention with this spirited group, but she holds her own in an underwritten role.

The third main character, the agent Oscar Wolfe, is portrayed by STNJ veteran Edmond Genest (left with Elizabeth Shepherd and Allison Mackie). He conveys the requisite courtly charm mixed with steeliness to hold his long-time clients in check, but his accent wandered all over the place. Sometimes he sounded Viennese; other times, he sounded like he came from Brooklyn. I doubt that such a character would say "soytainly" or "woith" instead of "certainly" and "worth." Genest's Austrian accent was convincing; his New Yawk accent, less so and distracting.

But it is the two servants who almost steal the show, most notably Emma O'Donnell as Della the maid, who gets the really fine bits of business. She runs up and down the stairs like she is performing an Irish step dance, hums under her breath while dusting the furniture and, in general, exhibits exasperation at the clamor swirling around her. She is a delight to watch! Patrick Toon is fine as the butler Jo, efficient and above the fray.

Rounding out the cast are Patrick Boll as the "Emerald King," Gil Marshall, successful international businessman and Julie's former lover who has reappeared to claim her hand. Tug Rice is appropriately stodgy as Gwen's fiancé/husband Perry Stewart. Their performances convey their disdain for theatrical life; they are clearly outmatched by the Cavendish drive for celebrity.

While The Royal Family may be a tad long for modern audiences unaccustomed to sitting for more than two hours, there is more than enough to hold our interest. The second act really soars with comedic action and fun.

Witty dialogue, over-the-top characters and outrageous plot developments make The Royal Family an ode to the theater if ever there was one. At the Shakespeare Theatre of New Jersey, it is a not-to-be missed launch of the troupe's 53rd season, and a fitting way for Bonnie Monte to celebrate her 25th anniversary as Artistic Director. As they say in the theater, "Brava!"

The Royal Family will be performed at the F.M. Kirby Shakespeare Theatre on the campus of Drew University, 36 Madison Ave., Madison, through Sunday, June 21st. For information and tickets, call the box office at 973.408.500 or visit www.ShakespeareNJ.org.